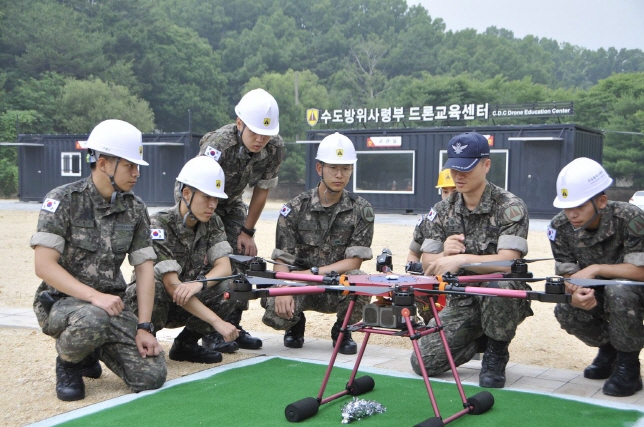 Soldiers of the Capital Defense Command receive training on how to operate drones. (image: Army)

SEOUL, Jul. 1 (Korea Bizwire) — The Army said Monday it has opened seven drone education centers across the nation as part of efforts to better cope with evolving security challenges by maximizing the latest technologies.

The facilities were established at Army units, including the Capital Defense Command and the Special Warfare Command, to nurture service members in charge of controlling drones and tasked with diverse missions, such as surveillance and transportation, according to the Army.

The centers, equipped with simulators and other training aids, will offer customized programs in accordance with their usage and regional circumstances each unit faces, the Army said.

Under the push for technology-driven military reform, the Army launched the first drone training center in 2017 and set up another the following year. In 2020, it is scheduled to open nine more such facilities.

“A total of 18 drone centers will help us nurture 1,000 soldiers with skills to professionally operate drones every year,” the Army said in a release, adding it is eyeing to expand such facilities further in phases.

With an aim to improve its tactical operational capabilities by utilizing the latest technologies, the Army in 2018 launched the country’s first drone battalion under the wing of the Third Army, headquartered in Yongin, just south of Seoul.