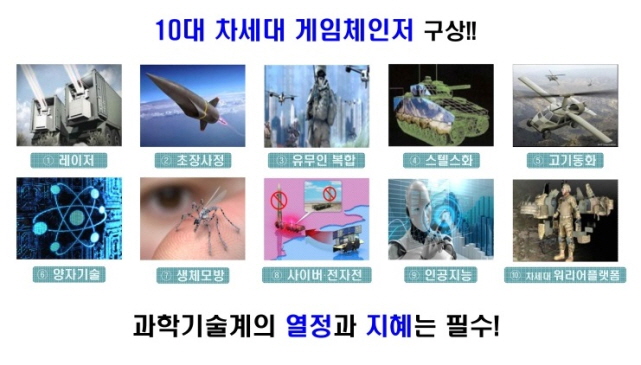 This image provided by the Army during a conference on Dec. 3, 2019, held in Seoul, shows the military’s 10 “next-generation game changer” development projects.

SEOUL, April 14 (Korea Bizwire) — The Army is pushing to set up a research institute for next-generation technologies, such as artificial intelligence and drones to expedite the development of “next-generation game changers,” officers said Tuesday.

The military recently launched a preliminary feasibility test on the establishment of its own research center and has been looking into foreign cases, according to the officers.

Stressing a paradigm shift in terms of warfare on future battlefields, the Army has been working to develop weapons maximizing advanced science and technologies, and presented 10 projects, including the development of laser systems, stealth technologies, quantum mechanics, biomimetics, artificial intelligence and next-generation warrior platforms.

Currently, the Agency for Defense Development (ADD) has been in charge of R&D projects for the military.

“The envisioned entity would be designed to develop advanced technologies we need in a fast and effective manner. What it looks like would be decided after policy reviews, as well as thorough discussions within the military and with other related agencies,” an Army officer said.

In 2018, the Army reshaped its ground warfare research institute into a think tank, named the Korea Army Research Center for Future & Innovation, to craft a future vision and push for military reform.