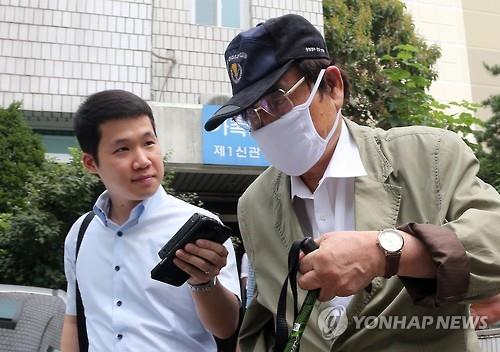 An arrest warrant was issued for a former lawmaker and husband of President Park Geun-hye’s cousin, identified only by his surname Yoon (R). Yoon is suspected of receiving bribes from a then suspect who was involved in a corruption case. In the photo, Yoon walks past a reporter after a hearing at the Uijeongbu District Court on Aug. 19, 2015. (image: Yonhap)

The Uijeongbu District Court approved the arrest of the 77-year-old, identified only by his surname Yoon, citing fear of flight or destruction of evidence.

Yoon is suspected of receiving tens of millions of won in 2013 from a then wanted suspect in a corruption case, known only by her family name Hwang, in order to cover up her tracks through his acquaintance at Cheong Wa Dae.

In 2008, Hwang disguised herself as a daughter of the then prime minister and started bribing government officials to get approval for the construction of an apartment complex. Hwang has since been convicted and is serving out a prison sentence of two years and six months.

If Yoon is indicted, it would be the first corruption scandal involving a member of President Park’s family.