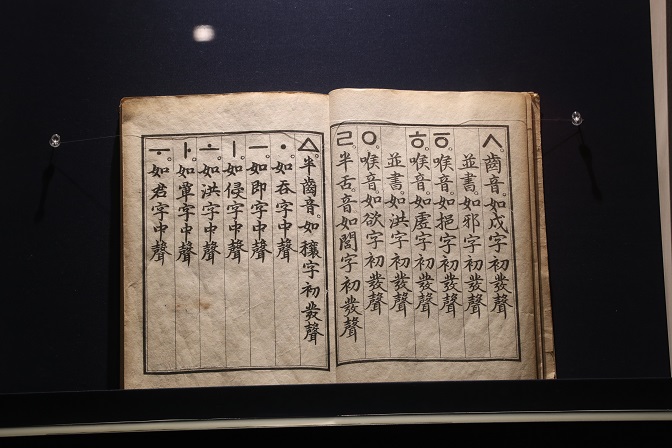 This Jan. 12, 2021, file photo shows “Hunminjeongeum Haerye,” an official manuscript describing the principles of the Korean alphabet, or Hangeul. (Yonhap)

SEOUL, July 22 (Korea Bizwire) — An art foundation said Thursday it is pushing to create commercial digital tokens of “Hunminjeongeum,” an official manuscript describing the principles of the Korean alphabet, Hangeul, and details on its letters and sounds.

The Kansong Art and Culture Foundation, which owns the Haerye edition of the historic document, said it plans to digitalize the document into a limited edition of the non-fungible token (NFT) and sell it at 100 million won (US$86,800) each.

“Hunminjeongeum Haerye” is a guidebook that explains why King Sejong invented Hangeul during his reign in the 15th century Joseon Dynasty, as well as other details on the Korean alphabet.

It was designated as a national treasure in 1962 and a Memory of the World by UNESCO in 1997.

The art foundation said it launched the project in a bid to preserve the invaluable heritage permanently in a digital form and raise funds to run its museum amid financial difficulties.

If the project is successful, it will be the first version of the country’s national treasure made into a collectible digital asset using blockchain technology and fetch 10 billion won for the foundation.

However, the plan is expected to cause a debate on the commercial use of the national heritage that holds great symbolic value but belongs to a private art foundation.

The state-run Cultural Heritage Administration (CHA) said it will examine the legitimacy of the project, as well as the potential effects it could have on the manuscript, including those from exposure to photography.

Making a copy or taking pictures and videos of cultural assets requires permission from the CHA by law due to the possible impact on their preservation. Any alteration to such assets must also go through a review by a special committee of experts.

“Most ancient books need to be unbound to be scanned, and this will eventually cause damage to ‘Hunminjeongeum Haerye,’ which is a cultural heritage in itself and also holds historic value from the way it was created,” a bibliographer said.

The Kansong foundation said it is aware of potential criticisms but “think of the project as a new type of sponsorship, rather than hoping for an active commercial trade.”

The NFT project was organized by the foundation’s subsidiary, with Publish, a blockchain-based media technology company, in charge of distributing the tokens.