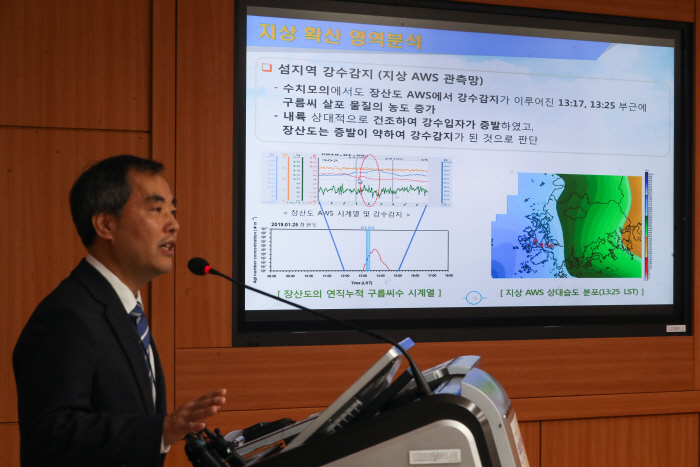 Joo Sang-won, chief of the National Institute of Meteorological Sciences, speaks in a press conference at the Korea Meteorological Administration in Seoul on Feb. 27, 2019. (Yonhap)

In the experiment conducted over the Yellow Sea on Jan. 25, an aircraft was sent to seed clouds with silver iodide, a compound believed to cause rainfall, as part of efforts to reduce fine dust in the atmosphere.

“There was almost no observation of significant precipitation in the experiment, which made it impossible to gauge the effect of dropping fine dust concentrations,” the Korea Meteorological Administration and the Ministry of Environment said in a release.

After the cloud seeding, cloud formation in the air was confirmed and rainfall was observed over some islands, but the dry atmosphere caused no rain to fall over inland areas, such as the southwestern towns of Yeonggwang and Naju, they said.

Researchers on the aircraft fired 24 shots of silver iodide bombs into clouds over the sea about 110 kilometers southwest of Gunsan, a port city on the country’s southwestern province of North Jeolla Province.

The analysis of changes inside the clouds through research equipment on the plane showed the number of larger clouds and precipitation particles increasing, while the development of low-level clouds was observed on a weather radar.

The researchers were able to confirm there was weak precipitation in the low-level clouds developed by the cloud seeding, but the inland areas saw no rainfall because the dry atmosphere caused falling precipitation particles to evaporate.

The decrease in the concentration of PM2.5 particles in the morning was analyzed to result from stronger winds and the increase from the infusion of air pollutants from the outside, the agencies said.

In the 10:00 a.m. to 3:00 p.m. period, when the experiment was conducted, the concentration of PM2.5 particles over the sea continued to go higher due to increased air pollutants, according to the environment ministry.