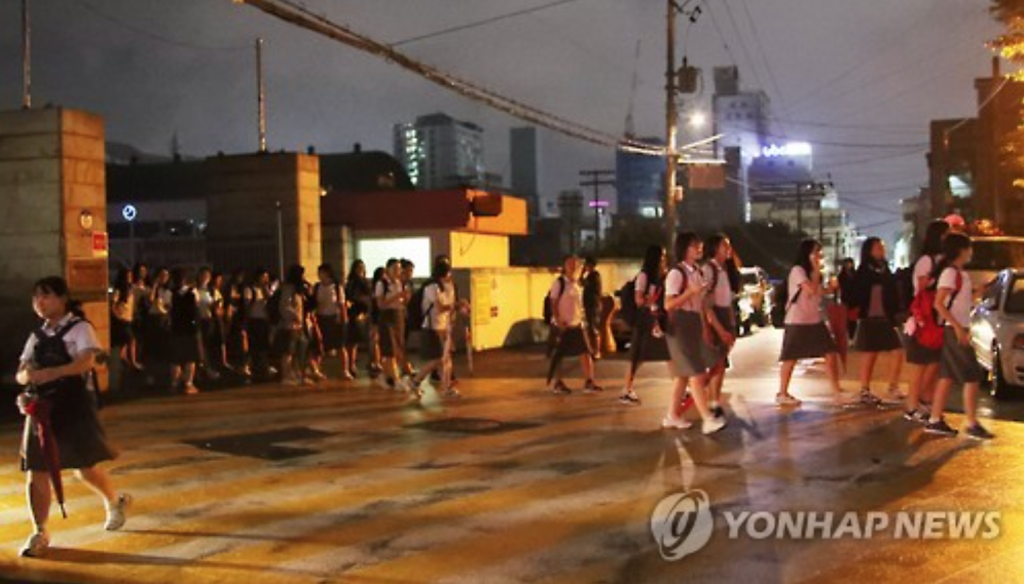 Students evacuate from a school in the southern city of Ulsan on Sept. 12, 2016 (image: Yonhap)

The quake detected at 8:35 p.m. was the strongest tremor reported on land in the country with the Korea Meteorological Administration (KMA) saying the epicenter was near Naenam-myeon region in Gyeongju, some 371 kilometers southeast of Seoul.

The quake was preceded by a 5.1-magnitude tremor detected at 7:44 p.m. in the same area located some 9 kilometers south of Gyeongju. The second quake was felt in most parts of the country that generally does not have a lot of tremors. Gyeongju is the old capital of the Shilla Kingdom (57 B.C.-935 A.D) and is located 371 kilometers southeast of Seoul.

The KMA said the series of earthquakes were strong enough to be felt throughout the nation. An official from the Seoul Metropolitan Government said the second tremor felt like a magnitude-2 earthquake in the capital city.

The agency also said South Korea suffered from 45 aftershocks estimated at a magnitude of between 2 and 3, adding the number may increase.

No serious damage was immediately reported, although there were two injuries, the KMA said.

Korea Hydro & Nuclear Power Co., which operates the country’s nuclear plants, said none of its reactors including those at the Wolsong, Hanul and Gori plants, which are close to the epicenter, were affected by the earthquake, adding they are still producing electricity. On the other hand, a combined cycle power plant in Ulsan, not far from Gyeongju, reported one of its thermal power generation units going off line.

Most people in the region near the quakes’ centers felt homes and buildings shake violently, with residents living in an 80-story highrise in South Korea’s largest port city of Busan saying they felt the building shudder. Busan International Finance Center said it evacuated most people from its 63-story building as a precautionary measure.

The Ministry of Public Safety and Security said damage being reported so far involved broken glass and cracks to walls and floors. It, however, said there was a spike in people calling authorities to find out about the quake.

The government said it set up the Central Disaster and Safety Countermeasures Headquarters to better collect damage reports and get a better grasp of the situation.

Korea Airports Corporation said the earthquakes did not damage the facilities as well as flight schedules.

Shortly after the earthquakes, President Park Geun-hye said the government will do all it can to gauge details of damage caused by the seismic shocks, and vowed to come up with safety measures for key facilities including nuclear reactors.

Prime Minister Hwang Kyo-ahn ordered ministries to make full-fledged efforts to provide support to those suffering from physical or material damage. The prime minister’s office said it has also ordered all related ministries to maintain emergency operations to prepare for additional aftershocks.

The government and the ruling Saenuri Party also plan to hold an emergency meeting on Tuesday to discuss what actions Seoul can take to safeguard the country from quakes down the road.