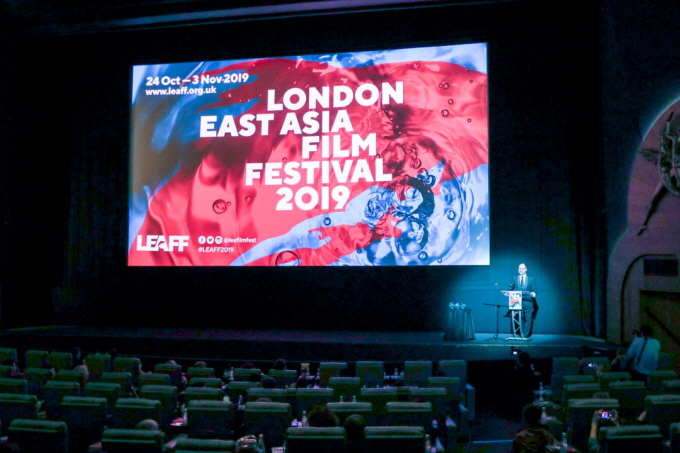 LONDON, Oct. 26 (Korea Bizwire) — Launched four years ago with only seven movies, the London East Asia Film Festival (LEAFF) has now established itself as a key platform to introduce the region’s vibrant cinema to Britain.

Over 60 titles from 11 countries will be screened around London until Nov. 3 under the theme of “crisis, chaos and survival.”

Jeon Hye-jung, festival founder and director, attributes its success to an ever increasing interest among Britons in emerging cinematic powerhouses in Asia including South Korea.

“There is a growing interest in Asia among Britons, and an increasing number of people like Korean movies,” Jeon said during the opening ceremony at the Odeon Luxe Leicester Square in the city’s West End.

“There are not many Asian movies opening in Britain, so many people await our film festival.”

Korean films figure prominently in this year’s festival, including K-cinema 100, a special section marking the 100th anniversary of Korean cinema.

LEAFF has offered a series of monthly screenings this year looking back at 100 years of Korean film history. K-cinema 100 is devoted to filmmakers “that will shape the future of Korean cinema,” the festival organizer said in a press release.

The section presents six films from young, promising directors, including Kim Bo-ra’s “The House of Hummingbird,” a coming-of-age drama centered on a teenage girl from a dysfunctional family; Yoon Ga-eun’s “Our House,” a drama about the meaning of family seen through the eyes of three children; and Lee Won-tae’s noir action film “The Gangster, The Cop, The Devil.”

Two North Korean films featuring female leads — “The Story of Our Home (2006)” by Ri Yun-ho and Ha Yong-ki and “A Broad Bellflower (1987)” by Kyun Soon-jo — will be also screened in the Special Spotlight section.