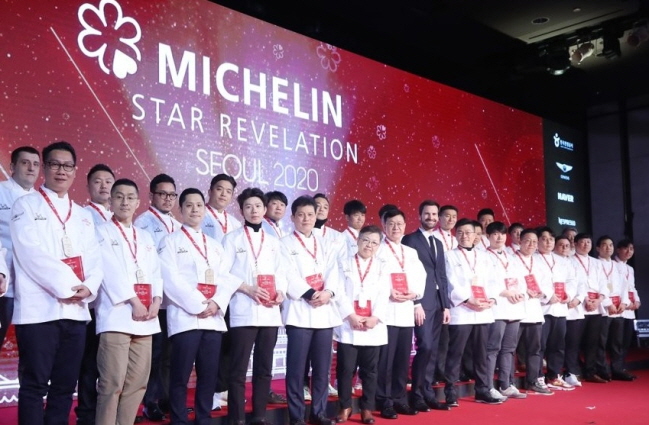 Chefs of Michelin Star restaurants in Seoul pose for a photo during a publication ceremony for the “Michelin Guide Seoul 2020″ at a Seoul hotel on Nov. 14, 2019. (Yonhap)

SEOUL, Nov. 15 (Korea Bizwire) — Controversy looms following a recent report by the South Korean media that there were ‘financial exchanges’ surrounding the designation of restaurants to be listed in the Michelin Guide Seoul 2020.

Michelin strongly denied the accusations, saying that “it’s a scheme committed by those who have nothing to do with Michelin.”

Yun Kyung-sook, head of Korean restaurant YunGa-MyungGa, revealed in a recent interview that Ernest Singer, a U.S. national known as the ‘Michelin broker,’ asked for a consultation fee.

Yun claimed that her restaurant was excluded from being listed on the guide, questioning the selection process of the Michelin Guide.

Poullennec met with reporters after the Michelin Guide Seoul 2020 held on Thursday and said that Ernest Singer has no relation with Michelin, and that he himself doesn’t know the man.

Poullennec said that Michelin will continue publishing the Michelin Guide in Korea.