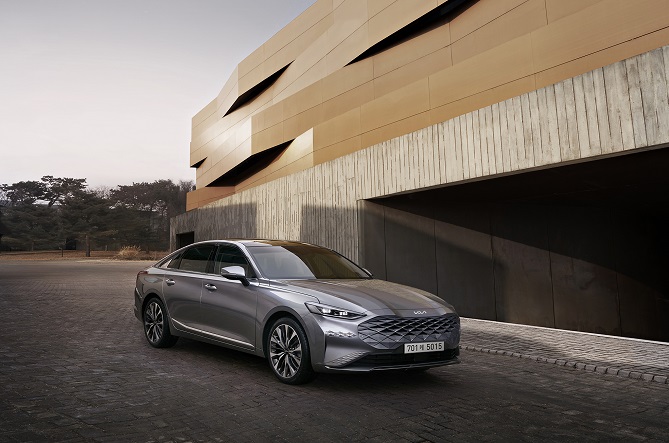 Kia Corp. reveals the exterior design of large sedan K8 in this photo provided by the company on Feb. 17, 2021.

SEOUL, May 3 (Korea Bizwire) — Amid forecasts that the shortage of automobile chips will extend until the end of this year, concerns are growing that the scarcity could serve as a stumbling block that prevents the Korean automobile industry from making a transition to future vehicles.

To tide over the shortage of chips, Kia Corp. released a ‘minus option’ in which it slashes the car price in return for excluding specs that require chips.

For its new large sedan, the K8, an affiliate Hyundai Motor Co. offers a 400,000 won (US$358) discount in return for excluding a string of chip-requiring functions, including the rear parking collision prevention assistance function and the remote smart parking assistance function.

The price of all-new Carnival minivan also can be cut by 400,000 won if the smart power tailgate function, which has been offered as a basic option for higher trim levels, is excluded.

As the global chip shortage phenomenon deepens, it could disturb the Hyundai Motor Group’s strategy of taking this year as the year of making a great leap forward in the electric vehicle (EV) business and speeding up the dominance of the electrification market.

In a situation where the basic options of existing models are excluded, it would be difficult for the group to ensure smooth production of EVs that require two or three times as many chips compared to existing internal combustion vehicles, even if it succeeds in releasing EVs as scheduled.

“EVs are ‘mobile home electronics’ in which automobile chips play a central role. Particularly during this transition to future cars, car manufacturers need to think about the internalization of automobile chips,” said Kim Pil-soo, an automotive technology professor at Daelim University College.