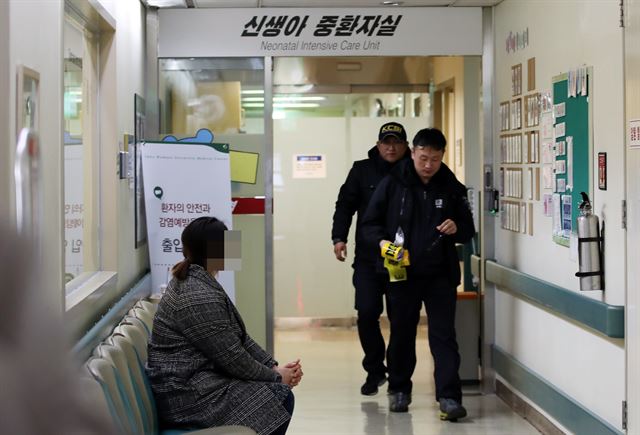 SEOUL, Dec. 18 (Korea Bizwire) — Forensic doctors were to conduct an autopsy Monday morning on the bodies of four newborn babies to determine what caused them to die successively in an 81-minute period over the weekend.

The prematurely born babies were in incubators at the intensive care unit for newborns at Ewha Womans University Medical Center in Mokdong, western Seoul, when they died between 9:31 p.m. and 10:53 p.m. on Saturday, police said.

Families said the babies all had bloated bellies and difficulty breathing before their deaths.

Doctors and hospital officials said they have no idea why the babies died.

On Monday, the National Forensic Service was to conduct postmortems on their bodies to determine the exact causes of their deaths. Possible causes could include a virus or bacterial infections, malfunctioning incubators or medical malpractice.

Officials said it will take about a month before the full autopsy results are finalized.

The Seoul city government, the Korea Center for Disease Control and Prevention, and other health authorities are also conducting examinations on the hospital’s ICU for newborns.

Prime Minister Lee Nak-yon ordered a thorough and swift investigation to determine the cause.

“A tragic incident that shouldn’t have happened has happened. I don’t know what to say to the parents of these babies,” Lee said during a meeting with senior aides, according to his office.

“I was briefed that health authorities are investigating while leaving all possibilities open, including infectious diseases, and that bacteria detection is suspected from the blood of newborns,” Lee said. “Health authorities and police should swiftly find out the exact cause.”