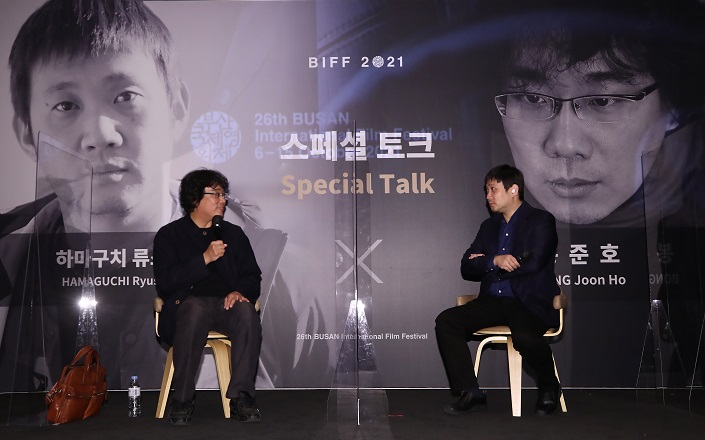 “Director Hamaguchi is a filmmaker who has captivating power and energy rarely seen in Japanese films,” Bong said in a special dialogue session at the 26th Busan International Film Festival (BIFF).

“As an old fan of his, I have a lot to know about him,” he said. “And as a colleague film director, I’m very curious about his secrets in filmmaking.”

The Japanese director and screenwriter made a rare visit to Busan, as the romantic film “Wheel of Fortune and Fantasy” and the drama “Drive My Car” were invited to BIFF’s Gala Presentation section, a section introducing new projects of the world’s renowned filmmakers.

The two films gave the 42-year-old filmmaker big awards in two different prestigious film festivals within a few months in 2021.

“Wheel of Fortune and Fantasy” is an omnibus film of three different stories of three female characters who, respectively, experience a love triangle, a failed seduction trap and a misunderstanding of past memories.

Based on the 2014 short story collection “Men Without Women” by renowned Japanese author Haruki Murakami, “Drive My Car” is about a middle-aged stage actor and director who lives in regret after his wife’s death.

The protagonist cherishes his 15-year old car, and practices and repeats the script of his play while driving.

“When I write a screenplay, I always start by writing characters’ dialogue. That’s because I’m only good at writing dialogue, I think,” said Hamaguchi.

“To make up for my weaknesses, I’ve focused on creating situations where people talk while moving, like in a car.”

He said it may not be effective to fill a two-hour film with too much dialogue, but it can be useful if those words reveal the genuine characteristics of the fictional speaker and even the actor himself.

Bong, who won the highest honor at Cannes, the Palme d’Or, in 2019 for his black comedy “Parasite,” said Hamaguchi showed “our lifelong journey to reach the deepest point of our mind” in his works, especially in “Drive My Car.”

“His movie helps us experience the progress to the core of our inner emotions and feelings,” said the Korean director. “Thanks to his sophisticated and intricate portrayal, the three-hour film is not an obstacle.”

This year’s BIFF, which opened Wednesday with the first in-person opening ceremony and red carpet event in two years due to the coronavirus pandemic, is set to last till Oct. 15.