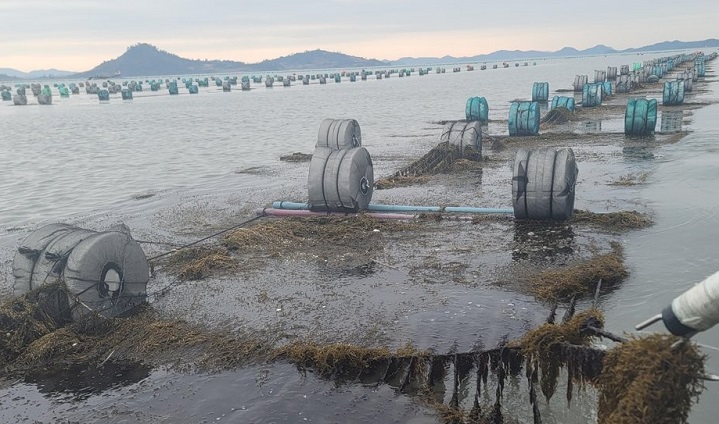 Invasive algae called Sargassum horneri covers a “gim,” or seaweed laver, farm in waters off the town of Sinan, South Jeolla Province, southwestern South Korea, on Jan. 21, 2021, ahead of the seaweed harvest. (Yonhap)

SEOUL, May 26 (Korea Bizwire) — A new nanocomposite with the function of repressing the growth of both bacteria and fungus has been developed using invasive algae called Sargassum horneri.

The National Marine Biodiversity Institute of Korea mixed carbon nanodots that were created by pulverizing Sargassum horneri with zinc acetate and water, and then treated them hydrothermally at high temperatures and pressures.

The institute explained that the nanocomposite’s power of restraining the growth of bacteria is equivalent to that of bleach that is diluted to have a 10 percent density.

The research team also conducted an embryonic cell toxic experiment by applying the nanocomposite into the embryonic cell of zebrafish, which shares 90 percent of the same genes with humans.

The experiment showed that the embryonic cell of zebrafish remained undamaged even 24 hours after being treated, and the embryo continued growing.

In contrast, the embryonic cell of zebrafish was damaged 30 minutes after being treated with diluted bleach liquid.

The research team concluded that the safety of the new nanocomposite material is proven especially when being applied for living organisms.