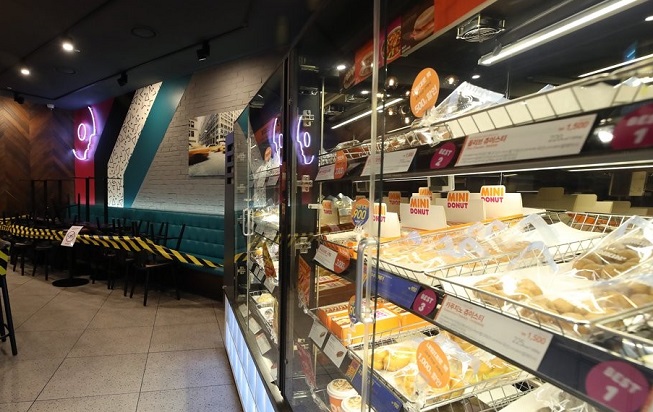 Chairs are set aside at a bakery in Seoul on Sept. 7, 2020, as all bakeries and cafes are subject to toughened social distancing guidelines, under which only takeout is allowed, to prevent the spread of COVID-19. (Yonhap)

SEOUL, Oct. 20 (Korea Bizwire) — The sales to operating profit ratio of South Korea’s bakeries is falling behind that of coffee shops and fried chicken restaurants.

Roughly 18,500 bakeries that produce their own baked goods were operating across the country as of August, according to a report from KB Financial Group, a major South Korean banking group.

The average lifespan of a bakery is estimated at 8.8 years, and 56.4 percent of the bakeries had been running for more than five years. The number of bakeries that shut down during the period from 2017 to 2019 stood at more than 2,000.

“Given that the nation’s bread consumption is expected to continue to grow for the time being, the business environment surrounding bakeries will likely remain favorable,” said Kim Tae-hwan, a researcher at KB Financial Holdings Research Center.