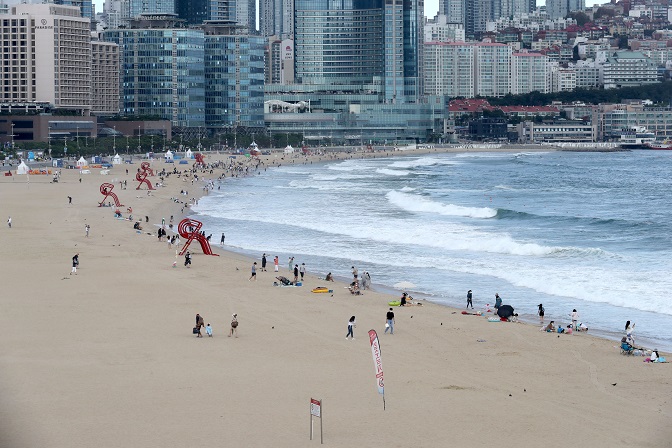 Haeundae Beach in Busan, 453 kilometers southeast of Seoul, is relatively quiet on Aug. 9, 2021, amid spikes in COVID-19 cases. (Yonhap)

BUSAN, Sept. 3 (Korea Bizwire) — Busan’s social distancing rules will be downgraded to Level 3, the second highest in the nation’s four-tier system, next week after nearly one month of the toughest Level 4 in the southern port city, the municipal government said Friday.

It said Level 3 social distancing restrictions will be in place in Busan for a month, beginning Monday, 28 days after Level 4 was enforced on Aug. 10.

Earlier in the day, Prime Minister Kim Boo-kyum announced the central government’s renewed social distancing policy that will be effective from Monday to Oct. 3, saying the greater Seoul area will remain under Level 4, with the rest of the country under Level 3.

Under Level 3, up to four people are allowed to get together and the permissible number can be increased to eight, as long as at least four people are fully vaccinated. Under Level 4, gatherings of three or more are banned after 6 p.m.

Level 3 also permits up to 49 people at events. Five types of entertainment establishments and karaoke rooms will be allowed to resume operations, though they must close between 10 p.m. and 5 a.m.

Restaurants and cafes also have to close by 10 p.m. and are allowed to serve only takeout and delivery from 10 p.m. to 5 a.m.

“The number of COVID-19 cases began to decline in Busan from two weeks ago. In consideration of tremendous difficulties faced by small business owners and self-employed people, the social distancing rules will be lowered,” Vice Mayor Lee Byung-jin said in a media briefing.