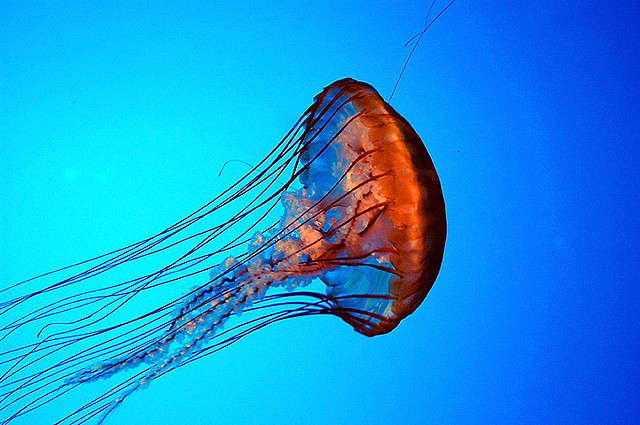 Jellyfish can clog up power plants, desalination plants, or ship engines. It can also damage fishing nets, poison captured fish, as well as the direct damage to humans in the form of injury or death through its nematocyst stings. (image: brainware3000/flickr)

SEOUL, July 17 (Korea Bizwire) – To keep the “unwelcome guests” of jellyfish at bay on the summer beaches, the Korean government plans to set up an integrated control system which detects and spot jellyfish automatically and kills them by robots.

The Ministry of Oceans and Fisheries announced on July 15 that it would develop the jellyfish control system based on intelligent robots to reduce damage by the jellyfish as part of the government’s so-called “Vitamin Project.”

Jellyfish populations may be expanding globally as a result of overfishing of their natural predators and the availability of excessive nutrients due to land runoff. When marine ecosystems become disturbed jellyfish can proliferate. For example, jellyfish reproduce rapidly and have fast growth rates; they predate many species, while few species predate them; and they feed via touch rather than visually, so they can feed effectively at night and in turbid waters. It may become difficult for fish stocks to reestablish themselves in marine ecosystems once they have become dominated by jellyfish, because jellyfish feed on plankton, which includes fish eggs and larvae. (Wikipedia)

The system will monitor the appearance of jellyfish with floating “smart buoys” and predict their migration routes. After the analysis, the system will eliminate the jellyfish rapidly by deploying the robots which can chase and grind up the gelatinous fishes.

Korean government plans to set up the system for trial operation in Masan Bay, South Gyeongsang Province, a place plagued with Moon Jellyfish frequently. Moon jellyfish or Aurelia aurita, common type of jellyfish is translucent, usually about 25–40 cm (10–16 in) in diameter, and feeds by collecting medusae, plankton, and mollusks with its tentacles, and bringing them into its body for digestion. It is capable of only limited motion, and drifts with the current, even when swimming.

An official at the ministry said, “If the system proves successful, it will enhance our ability to rapidly get rid of jellyfishes coming to our coastlines. With the system, we expect the damages by the jellyfish will be reduced drastically.”

Jellyfish can clog up power plants, desalination plants, or ship engines. It can also damage fishing nets, poison captured fish, as well as the direct damage to humans in the form of injury or death through its nematocyst stings.