It will allow SK Telecom Co., KT Corp. and LG Uplus Corp. to upgrade their services amid surging data traffic in the tech-savvy nation where most of its people use smartphones. 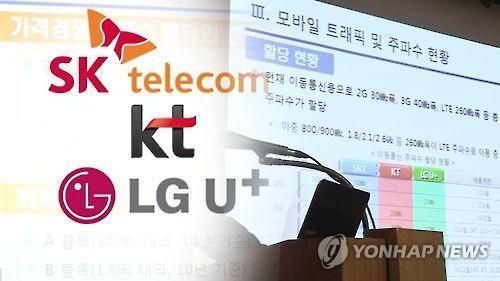 The frontrunner SK won its bids for a pair of D and E Block bandwidths in the 2.6 GHz band for 950 billion won (US$832 million) and 327 billion won, respectively, according to the Ministry of Science, ICT and Future Planning.

The minimum bidding price for the D Block was 650 billion won, the only block among the five up for grabs to have posted a price hike.

SK’s successful bid for the “golden” band lays the groundwork for its full-fledged projects for 5G networks, advanced virtual reality and Internet of Things (IoT) services. SK will use the band for the next 10 years.

Its main rival KT Corp. was awarded the 1.8 GHz band for 451 billion won and the underdog LG Uplus Corp. took the 2.1 GHz one for 381 billion won. The 700MHz band was not auctioned off.

KT will be able to offer broader bandwidth LTE services in synergy with its existing 1.8 GHz networks without any additional infrastructure investment. LG also added a frequency to the same 2.1 GHz band for faster services.

Ministry officials said the allocation of the new frequencies is expected to help encourage the infrastructure investment needed to meet growing mobile traffic and upgrade services.

“Through the bandwidths supplied this time, the world’s top-level mobile circumstances will be created, public convenience will be enhanced and ICT-related investment will be boosted,” said Jin Seong-bae, a senior ministry official.

The ministry opened the bid on Friday, which ended in a relatively dull competition. The total successful bid price stood at 2.1 trillion won, far lower than the 3 trillion won market watchers predicted.

Media has called the auction a “frequency war” among the three telecommunication firms highlighting the do-or-die rivalry between them to draw local customers.