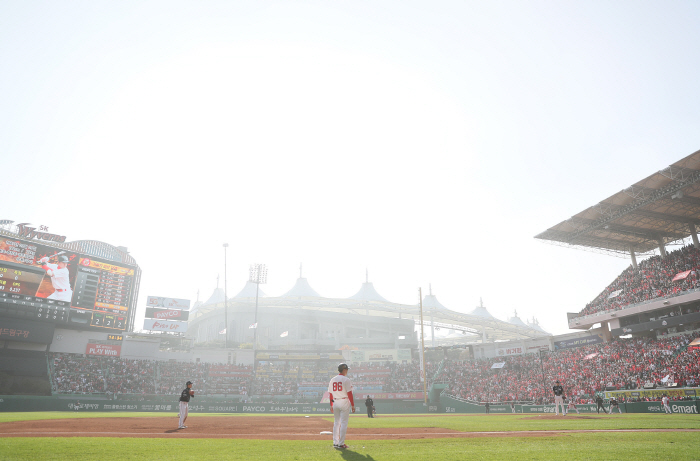 Game 5 of the Korean Series between the home team SK Wyverns and the Doosan Bears is played in dusty conditions at SK Happy Dream Park in Incheon, 40 kilometers west of Seoul on Nov. 10, 2018. (Yonhap)

SEOUL, Mar. 6 (Korea Bizwire) – South Korea’s professional baseball league announced Wednesday that it will hand out masks to fans to protect them against dust that continues to blanket the nation.

The Korea Baseball Organization (KBO) said it will distribute 75,000 masks to each of the league’s 10 clubs. A KBO official said the league will try to have the masks ready at the earliest possible date, though they may not be available on the first day of the new regular season on March 23.

In January, the KBO instituted a new rule to allow games to be canceled when air quality advisories are in place.

KBO’s game operations officials assigned to each stadium will have the option of calling off games when warnings related to fine dust concentrations have been issued. Such decisions will be made an hour before first pitch.

The fine dust warning is issued when the level of particles 2.5 to 10 micrometers in diameter (PM10) is expected to exceed 300 micrograms per cubic meter (㎍/㎥) for more than two hours. For ultrafine dust, or particles smaller than 2.5 micrometers in diameter (PM2.5), the warning is put in place when the level is expected to remain over 150㎍/㎥ for longer than two hours.

Fine dust problems are relatively new, and the KBO previously let officials arbitrarily decide whether to cancel games based on air quality on the day, whether advisories were issued or not.

On April 6, 2018, fine dust caused cancellations of three KBO games, the first time air problems forced such a move since the league’s inception in 1982. Another game was called off nine days later due to dust issues.

The Korean Series, the championship finals, was also played in dusty conditions last November, though no games were canceled.

Nine of the 10 clubs play their home games at open-air stadiums, and the Kiwoom Heroes, based in Seoul’s Gocheok Sky Dome, are the only team to call a domed ballpark home.