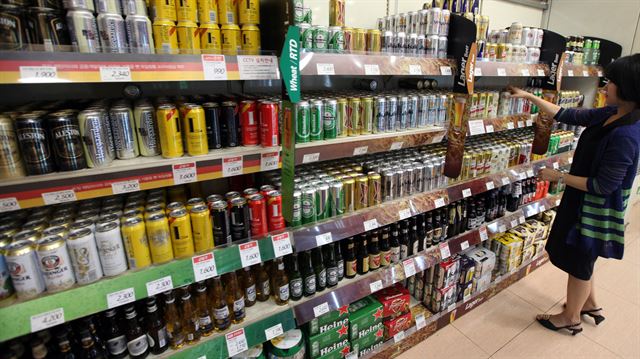 Industry watchers said such figures reflect changes in society where more consumers are opting to enjoy light drinks with their families after work, as opposed to going on a drinking binge with colleagues. (image: Yonhap)

SEOUL, May 2 (Korea Bizwire) – Sales of beer in South Korea are posting robust growth this year, largely backed by strong demand for imported beers, as consumers prefer to have light drinks over a meal instead of heavy liquor, industry sources said Tuesday.

According to data by E-Mart, the country’s largest discount outlet chain by sales, the proportion of beer sales to that of all alcoholic beverages stood at 55 percent in April, only a month after it surpassed the 50 percent mark for the first time.

Such brisk growth is mainly attributable to the popularity of imported beers, E-Mart said, whose sales surged nearly 42 percent to 8.8 billion won (US$7.75 million) in March. Its annual sales jumped 24.3 percent last year from a year earlier.

Industry watchers said such figures reflect changes in society where more consumers are opting to enjoy light drinks with their families after work, as opposed to going on a drinking binge with colleagues.

“The spread of such a trend deriving from growing single households and lone-eaters has also fueled the sale of beer,” an E-Mart official said.

South Korea has seen a rapid increase in the number of one-person households in recent years, with the tally standing at some 7.4 million, or nearly 35 percent of the all households in the country.

A new anti-graft law that came into effect last year, which mainly bans excessive hospitality and offering gifts between the interested parties, has partly helped spur the change in the way alcohol is consumed here, industry watchers said.