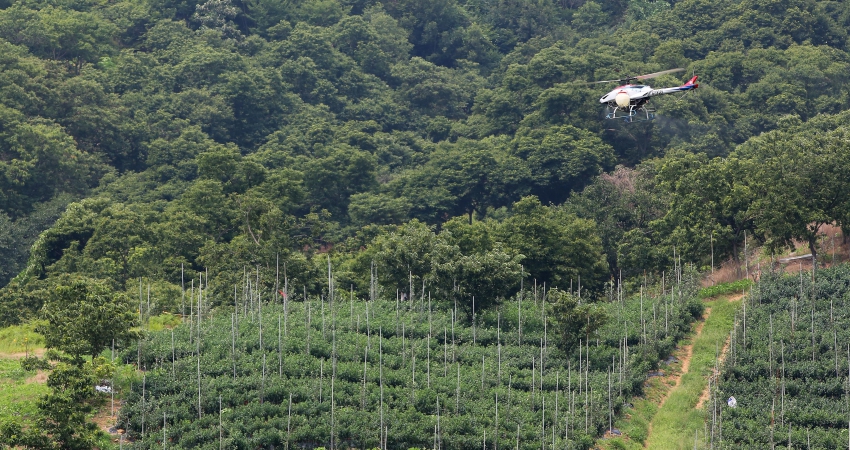 SEOUL, May 16 (Korea Bizwire) — Drones have been gaining popularity in their application for a wide range of industries, including agriculture and manufacturing. They have become more reliable and capable of different tasks as technology has advanced.

The Presidential Fourth Industrial Revolution Committee announced the establishment of an ‘Intelligence-based Forestry Disaster Management Strategy’ on May 15.

This decision will introduce new technology into current forest protection systems. The convergence of artificial intelligence (AI) and big data will help detect fire and landslides earlier on, and lead to rapid countermeasures.

Internet of Things (IoT)-based landslide detection systems will first be installed at Mt. Gariwang in Gangwon Province, which is particularly susceptible to environmental damage due to landslides.

The new technology is expected to improve the accuracy of current landslide forecasts more than threefold, helping to minimize damage.

The deep learning-based forest fire detection system will enhance reporting systems and reduce the response time in case of fire.

According to the committee, the pattern of forestry disasters has been irregular, causing significant damage and threatening human life as well as forest resources.

This year alone, 1,017 hectares of forest were engulfed by fire in the municipalities of Gangneung and Samcheok in Gangwon Province. Fire damaged 36 residential buildings to the tune of 60.8 million KRW in losses, and resulted in one death as well as four serious injuries.

According to statistics, landslides have obliterated 240 hectares of forest every year for the past 10 years.

Satellites can locate the outbreak of fire or onset of landslides, and transmit the information to an emergency operation center.

Drones will patrol the forests day and night and track fires when they break out, reaching remote locations that helicopters would have difficulty accessing.