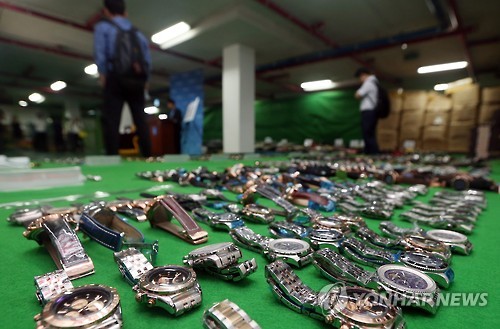 As the trend in the knock-off market moved to watches from bags, Louis Vuitton was pushed out of the top spot by Cartier. (image: Yonhap)

SEJONG, Aug. 14 (Korea Bizwire) – Among the fake designer products that were exposed by the Korea Customs Service during the first half of 2015, Cartier ranked No. 1 in terms of the number of fake items.

As the trend in the knock-off market moved to watches from bags, Louis Vuitton was pushed out of the top spot by Cartier.

According to the Korea Customs Service, the total value of Cartier knock-offs that were exposed was the highest, reaching 26 billion won. Chanel ranked second (14.7 billion won), and Louis Vuitton came in third (4.8 billion won).

The amount of smuggling is seen as being dependent on popularity. Since 2010, the total sum of Cartier products smuggled has increased. On the other hand, the value of Louis Vuitton fakes dropped one third of the amount in 2010 (123.4 billion won).

These numbers show the increase in the demand for fake watches, which is the most noticeable change this year. The Korean Customs Service explained that one of the biggest reasons for the increase in seized counterfeit watches was because owners of the biggest knock-off watch store in Itaewon were caught. Around 43 percent of the total exposed amount during the first half of the year was found there.

Also, officials explain that the decrease in fake bags seems to be the result of a crackdown on airmailed knock-offs.

The Korea Customs Service was determined to diminish the number of fake items. “Copyright violations and smuggling are not good factors for the image of Korea. No matter how small the quantity is, we plan to crack down hard on knock-offs. We will employ more concentrated and efficient tactics to seize fake goods.”