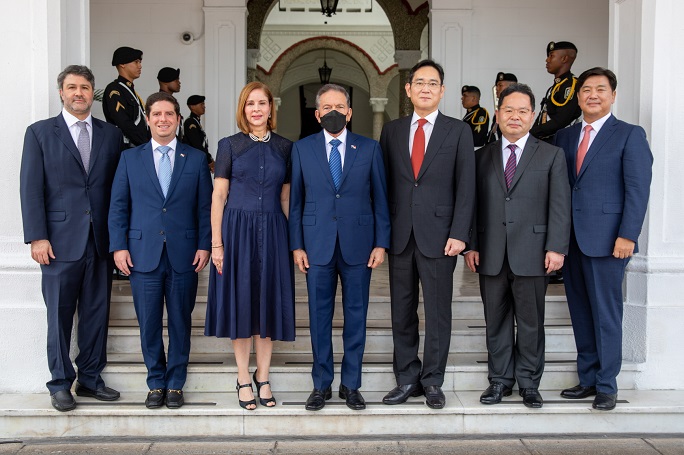 Then Samsung Electronics Vice Chairman Lee Jae-yong (3rd from R) poses with Panamanian President Andres Manuel Laurentino Cortizo (C) at the presidential palace in Panama City on Sept. 13, 2022, in this photo provided by the tech giant.

SEOUL, Nov. 27 (Korea Bizwire) — Business leaders will push to enlist support for South Korea’s bid to host the 2030 World Expo when they take part in this week’s gathering of an intergovernmental body in charge of overseeing the event, a business lobby said Sunday.

A delegation led by SK Group Chairman Chey Tae-won will head for Paris this week to attend the 171st General Assembly of the Bureau International des Expositions (BIE) scheduled for two days from Monday, according to the Korean Chamber of Commerce and Industry (KCCI).

During the visit, they plan to help enlist support for the government’s push to host the expo in the southern port city of Busan in 2030 through meetings with delegates of other member states on the sidelines of the BIE gathering, the KCCI said.

South Korea submitted its official application to host the 2030 expo to the BIE in September. It is competing with such countries as Saudi Arabia and Italy.

Seoul’s business sector has been active in helping with the government’s bid to host the global event.

Major business groups, including Samsung, Hyundai Motor, SK, Lotte and POSCO, have been running a joint committee to discuss cooperation on the government initiative.

Their officials have reportedly visited around 70 countries for the last few months and asked for their support.

The World Expo, which takes place every five years, is regarded as one of three major international events, along with the Olympics and the World Cup. BIE member states will vote on the venue for the 2030 expo in November 2023.