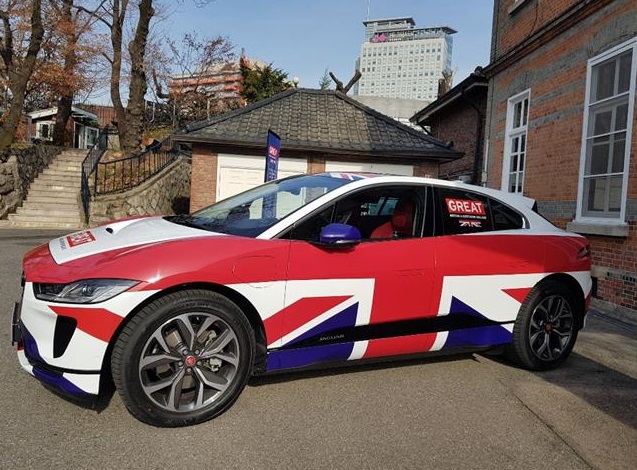 Jaguar I-PACE all-electric SUV, set to be launched in South Korea as early as in late March. (Yonhap)

The British Embassy here kicked off a five-day “Green is Great” campaign in order to highlight areas of cooperation in the low-carbon sector between Britain and Korea, British Ambassador to South Korea Simon Smith said in a press conference.

“In the coming years, electric, autonomous and zero-emission vehicles will not only transform the way we travel, they will also clean up our air. How we accelerate the transition to zero-emission vehicles — and ensure cleaner air for all our people — is then one of the most pressing issues in modern transport,” Smith said.

The I-PACE, Jaguar’s first all-electric sport-utility vehicle, will appear at a local automobile sports association, an autonomous driving test site named ‘K-City,’ and a local future car exhibition before it moves to the KINTEX exhibition hall in Ilsan, just north of Seoul, to be displayed at the Seoul International Motor Show due to open from March 28 and run through April 7.

The British company, owned by Indian carmaker Tata Motors Ltd., said it plans to launch the I-PACE pure electric SUV in the Korean market as early as in late March when the Korean government is expected to approve the sale of the emission-free car.

The EV drive by the British embassy comes after Jaguar Land Rover Korea posted a 73 percent on-year plunge in Jaguar model sales at 230 in the January-February period and reported a 7 percent on-year slump in Land Rover models at 1,374 during the same period.

“The U.K. is a global leader in the development and manufacture of ultra-low emissions vehicles. In 2018, 1 in 5 battery electric cars sold in Europe was made in the U.K.,” the senior diplomat said.

The U.K. has recently set a target for all of its new cars and vans to be effectively zero emission by 2040.

Particularly in the renewable energy and low carbon sectors, like EVs and offshore wind, there is huge potential for U.K.-Korea trade to grow, he said.

Currently, the trade between the two countries is worth around US$18.6 billion a year.