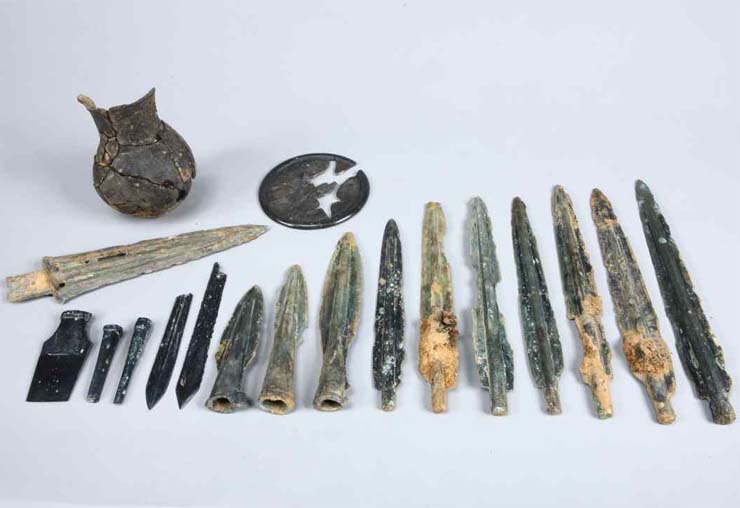 The wooden tomb, from 100 or 200 BC, is similar to others which are extensively excavated in Korea.

CHUNGJU , Jan. 20 (Korea Bizwire) – An archeological breakthrough has been made in the city of Chungju, Chungcheongbuk-do. A wooden tomb aged 2,200 years was found during an excavation investigation at a site set for a sports complex development. Inside the tomb, 19 artifacts from the Bronze Age were discovered, which outnumbers any artifacts found in a single wooden tomb in Korea, according to an announcement from the Jungwon Cultural Properties Institute on January 19.

The wooden tomb, from 100 or 200 BC, is similar to others which are extensively excavated in Korea. Among the 19 artifacts, there are 7 slender bronze daggers. The institute is expecting that the tomb and its artifacts would be designated as National Treasures of Korea.

Prior to this discovery, the institute had already found, at the site, two wooden combs from the early Iron Age, several combs from the Unified Shilla and Chosun Dynasty and two charcoal pits from the age of Three Kingdoms.

The wooden tomb discovered is classified as a ‘wooden coffin with stone mound (Dolmujinamuneolmudeom)’, and is similar to others found in regions including Jeonnam and Chungnam. It is extremely rare to make discoveries of this magnitude in Chungju. Most excavated tombs that have been discovered have been in bad shape, making it difficult for researchers to figure out architectural and burial processes at the time.

However, the Chungju wooden tomb is considered to be a rarity and an academic breakthrough due to its well preserved condition. The research team estimated that the tomb belonged to a powerful leader of a clan formed around Chungju before the advent of the Shilla, Baekje and Kaya Kingdoms in Korea.

The site will be revealed to the public at 2 PM on January 20.