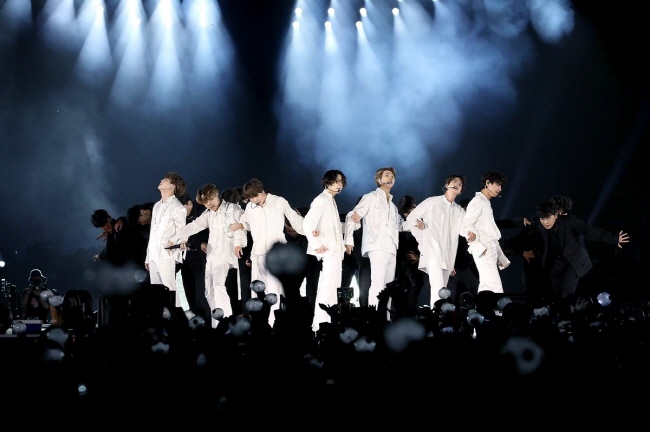 The latest world concert tour, “Love Yourself: Speak Yourself,” kicked off in May and took the band to 10 cities in seven countries — the United States, Britain, France, Brazil, Japan, Saudi Arabia and South Korea.

With three days of concerts in the band’s home country, set for Saturday, Sunday and Tuesday, BTS will wrap up its latest globe-trotting concert tour.

The three days of concerts in Seoul’s Jamsil Olympic Stadium are expected to bring together 135,000 fans, given that the number of fans for a BTS concert held at the same venue last year came to 45,000.

With the 20 concerts put together, the world tour that entertained an average 50,000 fans per concert will likely make a box office gross of 150 billion won.

In June, the trade publication Pollstar said the BTS world tour recorded US$78 million in ticket sales from 12 concerts that did not include the ones in Japan, Saudi Arabia and South Korea.

Its total sales including those by the band’s pop-up stores and profits coming from provisions of live broadcasting service for concerts could rise to 200 billion won.