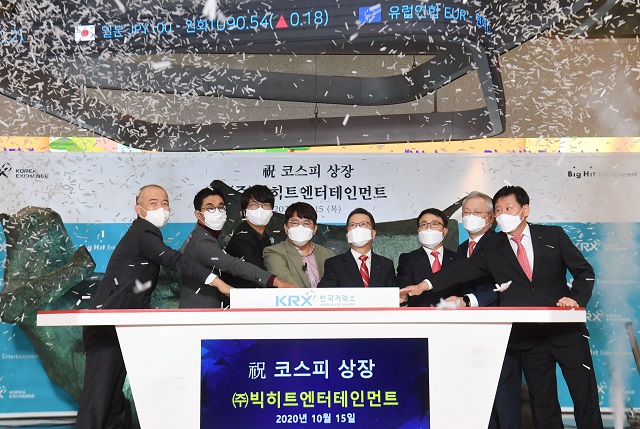 Bang Si-hyuk (4th from L), the creator of BTS and CEO of Big Hit Entertainment, attends a ceremony to mark his agency’s floating on the Korea Exchange in Seoul on Oct. 15, 2020. (Yonhap)

Right after debuting on the country’s main bourse on Thursday, the K-pop entertainment company soared to 351,000 won (US$306), sharply up from the 135,000-won initial public offering price, but closed down 4.44 percent.

On the following day, the company dropped 22.29 percent as foreign and institutional investors sought after profit-taking.

Local analysts noted that the selling spree may not have ended yet, warning of another flurry of sell-offs by institutional investors, who hold about 4.28 million Big Hit shares, or some 35.68 percent of the company’s stocks.

According to the data compiled by the Financial Supervisory Service (FSS), some 1,527,000 shares held by institutional investors will be traded within one month as a lock-in period draws near, with about 13,000 shares likely to be sold in as early as two weeks.

Local analysts said the selling spree may cause heavy losses to retail investors, who bought a net 403.8 billion won ($352.4 million) worth of Big Hit stocks during the first two days after the market debut.

“Bit Hit stock prices are likely to remain volatile for the next 2-3 weeks as institutional investors will attempt to lock in profits as soon as a lock-in period ends,” Hyundai Motor Securities analyst Kim Hyun-young said.

“But the stocks may rebound afterwards, as we are seeing some positive signs for the fourth-quarter earnings, such as fat album sales by BTS and SEVENTEEN,” he added.