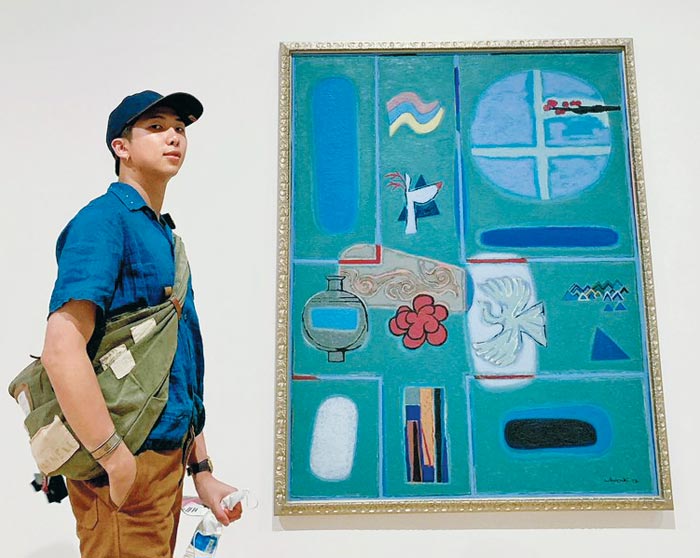 This image of RM with a painting by Kim Whan-ki at Ho-am Art Museum was captured from an official BTS SNS account.

SEOUL, Oct. 15 (Korea Bizwire) — When South Korea’s biggest annual art show, the Korean International Art Fair (KIAF), was on its course at the COEX convention center in southern Seoul on Sept. 26, a tall young man came to the venue, his face shaded under a cap.

He turned to the show’s booth allotted to Johyun Gallery and stood planted for a long while in front of flower and bird paintings by Korean master painter Kim Chong-hak.

A gallery employee walked him through the collection, but it was only after the man left the exhibition that the employee found out that the visitor was RM, the leader of K-pop global sensation BTS.

RM again showed up unannounced for a Korean art exhibition at the Jeongdong 1928 Art Center in central Seoul on Oct. 5, where he stayed two hours to savor a calligraphy work by legendary Korean painter Kim Whan-ki and some 70 more Korean paintings.

Prohibitively hectic global engagements, including a concert for which RM and the six other BTS members flew to the Saudi Arabian capital Riyadh the following week, couldn’t stop the art-loving K-pop star’s pursuit of major art events across his home country.

His love of art is not a secret to his fans after RM, whose legal name is Kim Nam-joon, has frequently tweeted photos of his visits to art museums and galleries around the world.

His attachment to Korean paintings and painters is, however, something out of the ordinary.

Nam-joon has hardly missed major art exhibitions in his home country, and his footprints have often drawn a hoard of other art lovers to the art venues he has visited.

He took time out of his busy schedule during BTS’ latest concerts in Busan in June to pay a brief visit to Busan Museum of Art to savor a special exhibition featuring master Korean painter Lee Ufan.

His message left on the visitors’ book of the exhibition — “I was here to enjoy (the exhibition). Master, I like your ‘Wind’ (series)” — made a splash among his fans. 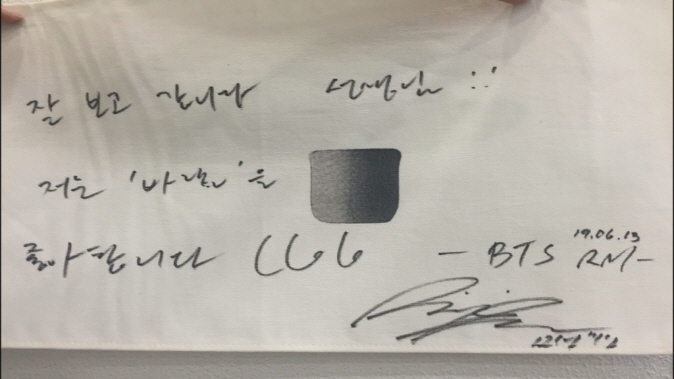 Late painter Kim Whan-ki apparently seems to be one of RM’s favorite artists.

He has toured modern Korean art exhibitions by Buk-Seoul Museum of Art and Ho-am Art Museum, south of Seoul, both of which featured painting works by the master artist.

RM tweeted photos of his visit to Ho-am earlier this month with the message, “Moon is up.”

During BTS’ recent five-week summer break, RM went all the way and indulged himself in his love of Korean art.

He flew to Venice, Italy, to watch a special retrospective exhibition of Korean painter Yun Hyong-keun held at the ancient city’s Portuny Museum.

Art circles in South Korea are excited about and welcoming of Nam-joon’s serious interest in Korean art.

“Seeing an idol singer relentlessly following Korean art, I thought that the Korean art world is not stripped of its future,” Lee Seung-hyun, an artistic director at the Jeongdong 1928 Art Center, told Yonhap News Agency.

Having personally met RM, Jeong Jong-hyo, an academic at Busan Museum of Art, has posted an SNS message about the K-pop star’s lucid knowledge about Korean modern and contemporary artists and art history.

“It’s not a coincidence that BTS’ lyrics and songs (have such depth),” he has said.