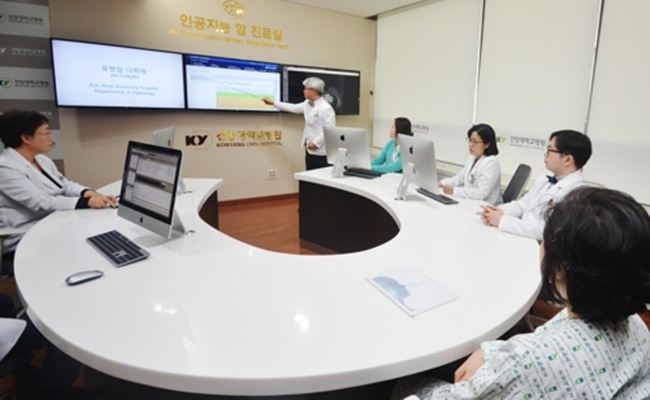 Professor Yun Dae-sung at Konyang Hospital’s cancer center said, “The biggest advantage of the Watson system is that it upgrades itself constantly and continues to gain more knowledge about cancer treatment. (Image: Konyang University Hospital)

SEOUL, April 6 (Korea Bizwire) – Konyang University Hospital reported the first successful diagnosis of a stage three breast cancer patient by IBM’s Watson for Oncology yesterday, the first time the supercomputer was put to use to discover the best type of cancer treatment since its launch at the hospital last month.

The Watson supercomputer was used for the first time at the cancer center at Konyang Hospital to analyze and find the most effective treatment for a breast cancer patient in her 40s, based on its database consisting of medical journals, research, and clinical trials.

Watson has been attracting much attention in the medical field as the artificial intelligence system can go through a vast amount of relevant information and suggest the most appropriate method of cancer treatment for each patient, at a speed that was impossible in the past.

The supercomputer is expected to develop even better results over time as more patients are diagnosed and treated using its software. Watson’s data records expand when information from each new patient is added, yet the computer can still recommend the best cancer treatment within seconds.

Konyang University Hospital became the third hospital in South Korea to adopt the cognitive computing system after Gachon University Gil Hospital and Pusan National University Hospital, when it chose to deploy Watson to better tackle one of the most common types of cancer in the country.

Professor Yun Dae-sung at Konyang Hospital’s cancer center said, “The biggest advantage of the Watson system is that it upgrades itself constantly and continues to gain more knowledge about cancer treatment.

“Access to various types of cancer treatment around the world is now available here at home.”

At the current stage of development however, the consensus in medical circles is that Watson is not considered competent enough to diagnose and treat patients on its own without the guidance of doctors, as communication between doctor and patient is thought to be crucial in treating cancer, something that Watson is incapable of doing.

“Watson is an assistant to our medical team which aids us when making medical decisions. When Watson’s recommended course of treatment is different from what doctors think is best, patients can choose which advice to follow,” Professor Yun added.

With Watson, Konyang Hospital officials are hopeful that cancer patients will no longer have to wait for a long time or travel far afield to visit major hospitals in Seoul.