This composite photo shows three BTS members –Jin, Jungkook and Jimin (from left) — arriving at Incheon International Airport from Los Angeles where it had its first in-person concerts in two years. (Yonhap)

SEOUL, Dec. 6 (Korea Bizwire) — K-pop superband BTS will take a long vacation from Monday to spend the holiday season with their family members upon returning from a trip to Los Angeles where it secured a music honor and had four sold-out live concerts, the group’s agency said.

It will be the group’s second formal long-term leave since 2019.

Earlier in the day, three members of the septet — Jimin, Jin and Jungkook — arrived at Incheon International Airport, west of Seoul, amid a flurry of camera flashes from their fans and journalists.

They returned home after undergoing a quarantine procedure at the airport.

BTS took home the artist of the year, considered the top honor, at this year’s American Music Awards, one of the three major music awards in the United States, on Nov. 22 (U.S. time).

The group also had its first in-person concerts in two years amid the COVID-19 pandemic in the U.S. city.

The K-pop septet raked in US$33.3 million, with 214,000 tickets sold for the four concerts at SoFi Stadium in Los Angeles held between Nov. 27 and Dec. 2, according to the U.S. music magazine Billboard.

The revenue from the gigs marked the largest gross for a run of shows at a single venue since 2012, when British rock band Pink Floyd’s Roger Waters earned $38 million over nine shows at Estadio River Plate in Buenos Aires, Argentina, Billboard added. 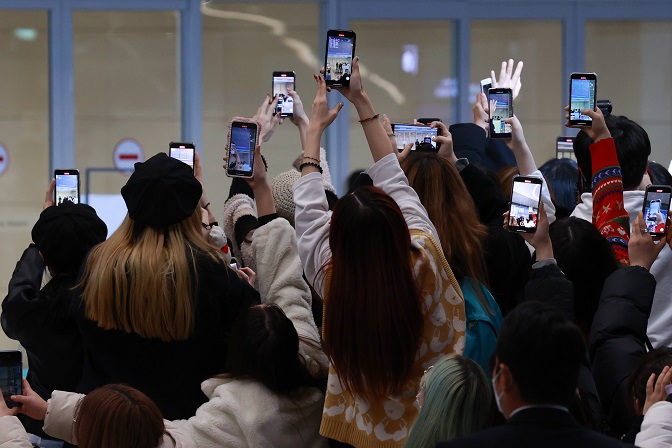 Fans take photos of BTS arriving at Incheon International Airport, west of Seoul, on Dec. 6, 2021, after a trip to the United States for the septet’s concerts at SoFi Stadium in Los Angeles. (Yonhap)

Upon their return, the three members entered a 10-day self-quarantine mandated by the government for all international arrivals in order to stem the spread of the omicron variant of the new coronavirus.

Four other members — RM, Suga, V and J-hope — are reportedly staying in the U.S. to have private time.

“BTS has communicated with fans despite the COVID-19 pandemic last year and this year and has established itself as a global top artist with brilliant feats,” Big Hit Music said.

“This long vacation will be a time for BTS to recharge new inspiration and energy as an artist and creator that has worked hard despite the pandemic.”

It added the group plans to focus on preparations for a new album and a concert after the vacation.

Big Hit did not mention how long the vacation will be. The group, however, is expected to return before the Grammy Awards ceremony on Jan. 31 (U.S. time) where it was nominated for three prizes.

With the vacation, the band will be absent from annual year-end music awards hosted by KBS and SBS television networks in addition to the Mnet Asian Music Awards on Saturday.

Mnet, the music cable channel that hosts the awards show, confirmed last week that BTS will not attend the event as they have to self-quarantine for 10 days upon arrival from the U.S.