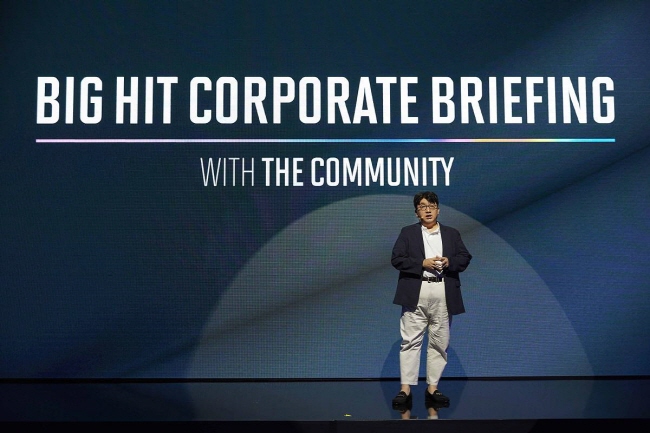 A media report said earlier this week that Big Hit is on its way to acquire and merge with Pledis Entertainment, home to an army of popular K-pop bands including NU’EST and Seventeen.

Pledis was established in 2010 by Han Sung-soo, who worked as a manager of K-pop diva BoA under South Korea’s biggest K-pop music label, SM Entertainment.

Big Hit has neither confirmed nor completely denied the news report.

“(Big Hit) is open to various opportunities (of merger and acquisition), but nothing has been decided over the issue,” the management agency said.

The reported acquisition, if finally accomplished, is the latest major addition to Big Hit’s aggressive business expansion steps that it has been taking since last year.

In 2019, Big Hit debuted Tomorrow X Together, also known as TXT, as the music label’s second-ever boy band after BTS since the company’s establishment in 2005.

Since its debut in 2013, BTS has been virtually the sole focus of Big Hit, and with the band’s sensational global ascent last year, the agency has been seeking to expand its portfolio of contract artists.

As part of such efforts, Big Hit took over a medium-sized talent agency, Source Music, which is home to popular girl band GFriend, in July last year.

Two months later, Big Hit announced its plan to launch a new girl band in 2021 in collaboration with Source Music through a global audition involving South Korea, the United States, Australia, Japan and other countries.

In March the same year, Big Hit teamed up with CJ ENM to set up a 7 billion-won (US$6.04 million ) joint venture, named BELIFT LAB Inc., which specializes in fostering K-pop idol groups. 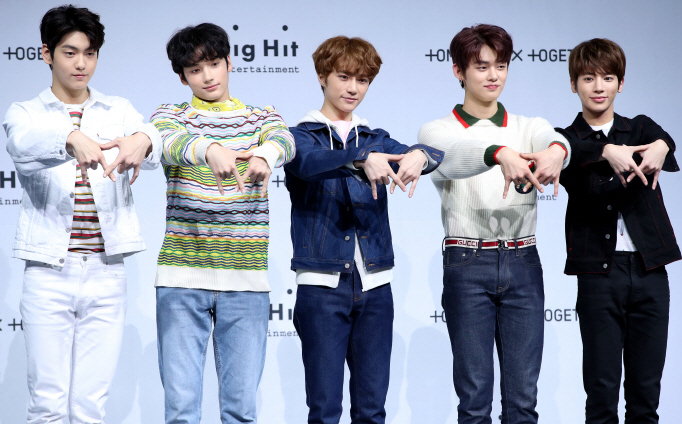 TXT posing for photos during a media event to showcase their debut album “The Dream Chapter: Star” in Seoul on March 5, 2019. (image: Big Hit Entertainment)

The year 2019 has been one of the best years for Big Hit, driving the company to rival South Korea’s top three K-pop music labels, SM, JYP and YG Entertainment.

In the first half of 2019, Big Hit recorded sales of 200.1 billion won on the back of BTS’ sensationally successful world tour, the biggest amount after SM’s sales of 290.4 billion won in the same period.

Driven by such glittering corporate earnings last year, Big Hit also announced in July a plan to relocate to a new, spacious 19-story building in Seoul’s Yongsan district in May this year from its current single-floor headquarters in southern Seoul.

As Big Hit recorded dramatic business growth over the years, investors are also closely watching for the company’s potential initial public offering after its CEO Bang Si-hyuk said in a media interview in 2017 that the company may consider going public.