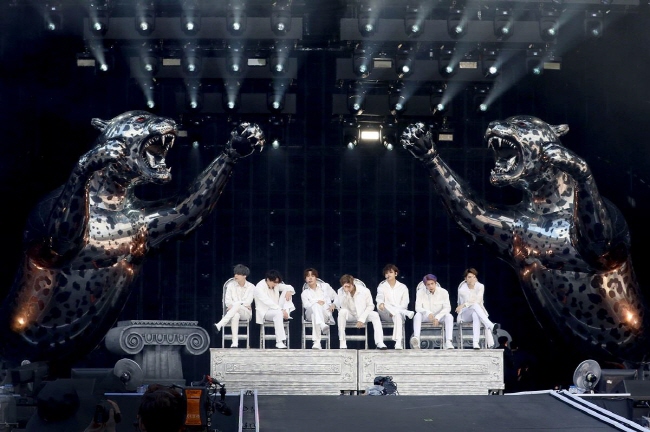 SEOUL, Sept. 15 (Korea Bizwire) — While fans across the globe are glued to every move the seven members of K-pop boy band BTS make, the septet has often drawn inspiration from Korea’s traditional cultural heritage, promoting it through its worldwide music career.

BTS has often appeared in hanbok, traditional Korean dress, or hanbok-inspired stage costumes to perform a modern arrangement of one of the best-known Korean folk songs, “Arirang,” during its overseas concerts. Such performances make the band a de facto ambassador for Korean culture.

Last year, BTS was awarded a cultural medal by the South Korean government for the major role it has played in publicizing the Korean language globally.

The band’s leader, RM, said during a media interview earlier this year that BTS is determined to stick to Korean-language lyrics despite its growing global influence.

“A Hot 100 and a Grammy nomination, these are our goals. But they’re just goals — we don’t want to change our identity or our genuineness to get the number one,” RM said in the interview with U.S. magazine Entertainment Weekly.

“Like if we sing suddenly in full English, and change all these other things, then that’s not BTS. We’ll do everything, we’ll try. But if we couldn’t get number one or number five, that’s okay,” he said.