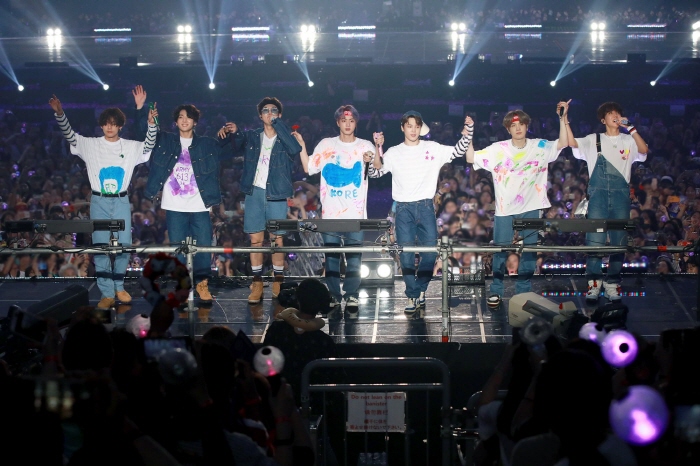 According to the report by a research team led by Pyun Ju-hyun, a business professor at Seoul’s Korea University, BTS spawned a total of 481.3 billion won in direct and indirect economic effect with its “BTS 5th Muster [Magic Shop]” performances held in Busan on June 15-16 and in Seoul on June 22-23.

The two-day Seoul event alone was responsible for 345.8 billion won, according to the report.

The research team came up with the number by deducting the local expenditures for the concerts, including the costs of renting the concert venues, hosting the events, and the traveling and accommodation costs of the band’s staff and ticket holders, from the band’s total ticket and merchandise sales revenue.

Besides the direct costs, the research team also took into account the assumed indirect economic effect, such as the promotional effect the concerts had on the cities in drawing local and foreign tourists thanks to BTS.

The report then said the 135.5 billion-won economic effect of the BTS’ Busan concerts accounts for 1.6 percent of the port city’s 2018 gross domestic production of 8.3 billion won.

The four rounds of home concerts last month drew a total of 94,000 fans at home and from overseas.

“(The research) verifies the importance of the culture industry as an economic growth engine,” the professor said.

“I expect that events like these could serve as a good window for boosting the local economy and creating foreign demand for Korean tours.”