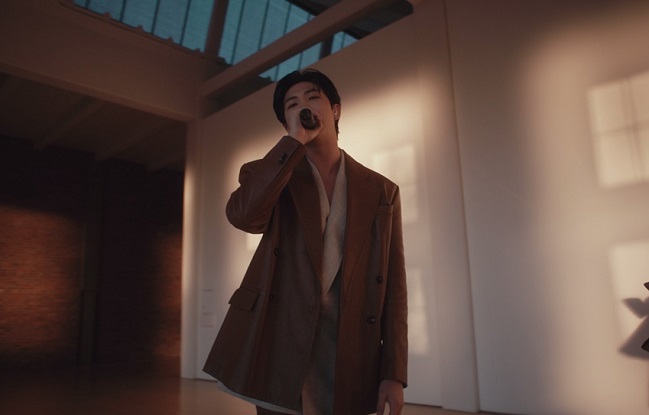 This photo provided by Big Hit Music on Dec. 9, 2022, is a scene from BTS member RM’s live performance video of his first solo album “Indigo” filmed at Dia Beacon, a contemporary art museum in New York.

SEOUL, Dec. 9 (Korea Bizwire) — RM, leader of the K-pop supergroup BTS, on Friday released a video of a live performance of tracks off his first individual album at Dia Beacon, a contemporary art museum in New York.

The rapper sung four songs off the album — the title track “Wild Flower,” “Still Life,” “Change pt. 2″ and “No. 2″ — in the video available on the group’s official YouTube channel.

RM performed the tracks walking through the museum’s maze-like garden and between art pieces on display inside the museum to deliver the album’s message of harmony between music and art.

The 28-year-old singer is well known for his interest in and deep knowledge of art. He has said “Yun,” the fourth track off the new album, was named after late Korean painter Yoon Hyung-geun, known to be one of his most respected and favorite artists.