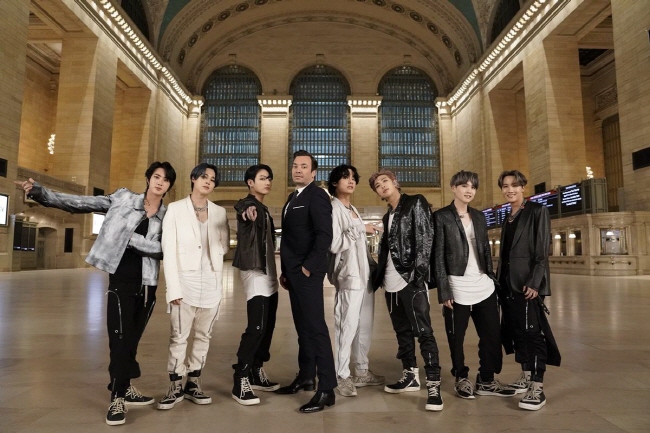 This image of BTS next to show host Jimmy Fallon during the band’s appearance on “The Tonight Show Starring Jimmy Fallon” on Feb. 24, 2020, was provided by Andrew Lipovsky/NBC.

SEOUL, Feb. 25 (Korea Bizwire) — Putting on the debut performance of “ON,” the lead track of the new BTS album “Map of the Soul: 7,” the South Korean super band has rocked Grand Central Terminal, a symbolic public space in New York City.

The septet unveiled a premiere performance of “ON,” pre-filmed in a deserted Grand Central Terminal in Midtown Manhattan, through “The Tonight Show Starring Jimmy Fallon,” a U.S. late night show, on Monday (U.S. time).

With the performance, the septet brought back live the stylish stage costumes and dazzling choreography of “ON” after initially showcasing them through a music video.

The team of some 30 dancers and marching band members who appeared in the music video was also brought back together for the debut performance at Grand Central, reviving the majesty of the “ON” music video.

Ahead of the widely watched performance, BTS also sat down with the show host, Jimmy Fallon, inside a New York subway train to talk about the new album and their eventful seven-year career.

“We come from a small country in Asia. I think we can prove that someone from outside can be in the mainstream. That’s why we feel so happy,” team leader RM said of the band’s sensational global ascent.

“It really means a lot to us,” member J-Hope said, referring to devoted BTS fans singing in Korean.

“These people speak different languages, are from different countries and different ethnicities. It’s an honor that they all listen to and enjoy our song, and I think that’s what drives us to continue to perform,” he said. 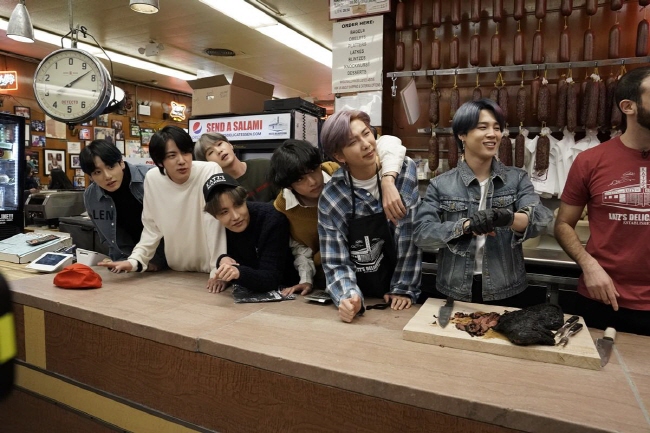 This image of BTS during the band’s appearance on “The Tonight Show Starring Jimmy Fallon” on Feb. 24, 2020, was provided by Andrew Lipovsky/NBC.

Asked to name the greatest forte of BTS, member Suga pointed to the social messages embedded in the band’s music.

“Our greatest forte is that we send messages that people in their teens, twenties and thirties can all relate to and give comfort through our music.”

During the show, BTS also answered questions submitted by members of its fan base, known as “Army,” and visited Katz’s Delicatessen, a historic deli on the Lower East Side of Manhattan to eat and meet with locals.

On Tuesday (U.S. time), the band will appear on another American show, “The Late Late Show with James Corden,” before giving its first home performance of “ON” in South Korea on Thursday on the Mnet music channel.

The number 7 signifies the seven years the band has been together for its music career as well as the seven members.