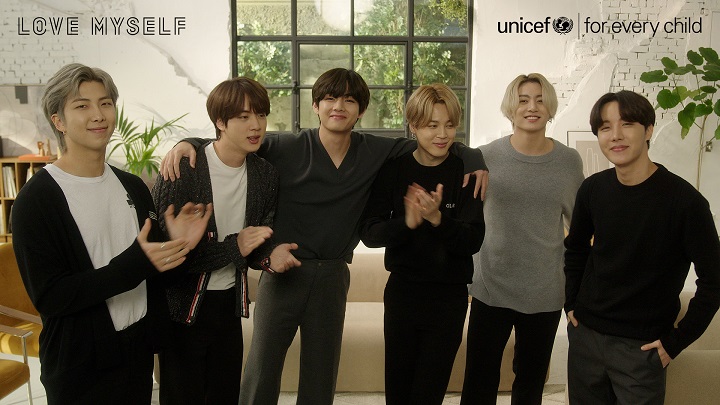 This photo, provided by the Korean Committee for UNICEF on March 5, 2021, shows BTS taking part in the “Love Myself” campaign.

“I thought we’re doing this for people around us but I realized as time passed that many changes also happened within myself,” Jimin said in a video marking the renewal of the group’s support for the global initiative.

Jin agreed, noting how the campaign that kicked off to support UNICEF’s #ENDviolence program has made his life more full.

“Learning to love myself made me happy and confident, and understanding how precious the people around me were made me more sincere in my relationships,” he said, adding that he wants to fully take part in the initiative rather than simply adding his name for promotion.

The video marks the latest in BTS’ support for UNICEF. Since 2017, the seven-piece act and its management agency Big Hit Entertainment have partnered with the Korea Committee for UNICEF to help promote values like love and kindness.

In 2020, the band even delivered a special message at the 75th United Nations General Assembly, where it urged youth to remember and seek out their dreams despite the challenges they may face from the COVID-19 pandemic.

Their efforts have paid off, raising US$2.98 million globally for UNICEF as well as encouraging children and teens to open up about their own experiences.

The U.N. organization said that BTS and Big Hit have agreed to renew their support for the #ENDviolence program through the “Love Myself” campaign.

They will also donate over $1 million to UNICEF, along with proceeds from campaign merchandise and part of the profits from the Love Yourself album series.

“We are extremely moved and thankful that our ‘Love Myself’ campaign, which began with small steps, is now being elevated to an even bigger partnership,” said RM, adding that the initiative helped BTS grow as a team and as individuals.

“Through their music and messages, BTS has said to their global audience, ‘You are not alone. This is a difficult time for all of us. And together, with love and kindness, we will get through it,’” said Henrietta Fore, UNICEF executive director.

“As our partnership moves into a new stage, together we are committed to reimagining a kinder, safer and more connected world.”