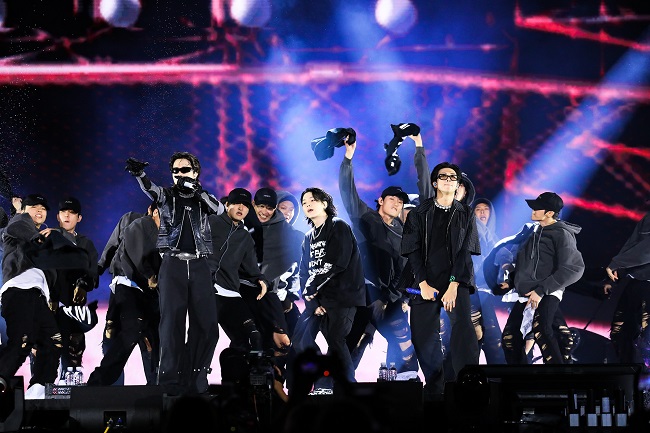 This image, provided by Big Hit Music, shows BTS at the concert titled “Yet To Come in Busan” at the Busan Asiad Main Stadium on Oct. 15, 2022.

The K-pop giant nabbed The Group of 2022 and The Concert Tour of 2022 (for “BTS Permission To Dance on Stage”) during the awards ceremony in Santa Monica, California, on Tuesday (U.S. time).

Jungkook, a BTS member, won The Collaboration Song of 2022 for “Left and Right,” his collaborative single with U.S. singer-songwriter Charlie Puth.

BTS beat seven other nominees, including Korean girl group BLACKPINK, Coldplay, Imagine Dragons, Maneskin and OneRepublic, to be named the best group for the third year in a row.

BTS, Jungkook and BLACKPINK had also been nominated for best music video for “Yet to Come” and “Left and Right” and “Pink Venom,” respectively, but the honor went to Taylor Swift for the video of “Anti-Hero.”

The People’s Choice Awards have been held since 1975 to recognizable artists and entertainers in various fields, including movies, television and music, with the public and fans voting for the winners.

Last year, BTS won three prizes, including the best group of the year, and the global South Korean TV sensation “Squid Game” was hailed as the “bingeworthy” show of the year.