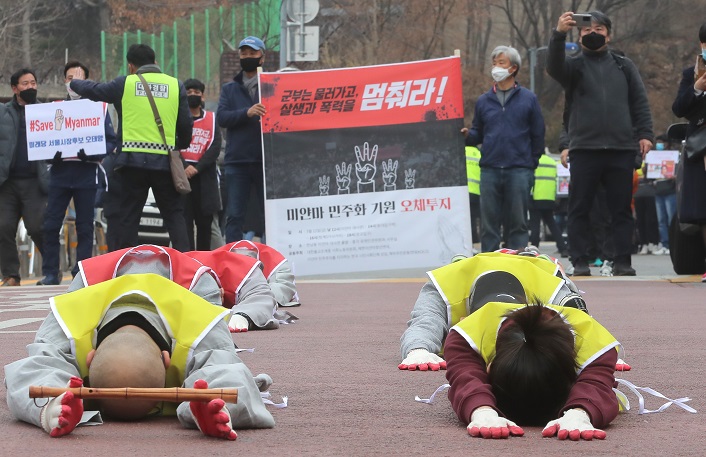 Monks from Jogye Order, South Korea’s largest Buddhist sect, and Myanmar nationals residing in the country conduct an “ochetuji” march from the Myanmar Embassy to the office of the U.N. Human Rights Council in Seoul on March 12, 2021, praying for the recovery of democracy and peace in the Southeast Asian nation. (Yonhap)

SEOUL, March 15 (Korea Bizwire) — A recent protest march in South Korea by Buddhist monks and Myanmar activists calling for democracy in Myanmar by throwing their bodies to the ground is gaining attention in the Southeast Asian nation.

Four monks from the Jogye Order of Korean Buddhism, joined by students and activists from Myanmar, conducted an “ochetuji” march from the Myanmar Embassy in Seoul to the office of the U.N. Human Rights Council (UNHRC).

Ochetuji is the Buddhist act of expressing respect for Buddha by lying prostrate on the ground.

They spoke of the unjustness of the recent military coup in Myanmar, and the illegal arrests, incarceration, and bloody violence committed by both military and police forces.

By the time they arrived at the UNOHCR, the four monks had foreheads stained black from the constant bows on the asphalt road.

The protest march lasted for five hours, ending with the delivery of a statement to the UNHCR criticizing the Myanmar military for committing violence and calling on the U.N. to come up with effective countermeasures.

“There cannot be any dictatorship over people,” said Ven. Hyemun. “We will stand with the Myanmar people until they achieve full democracy.”

The protest march and the delivery of the statement were broadcast live via the Facebook account of Wai Nwe Hnin Soe, who is currently the leader of the Myanmar Youth Organization in Korea.

His video reached those fighting on the frontlines for democracy in Myanmar. More than 3,000 comments have been posted on the live broadcast, thanking the monks and the participants for standing with the Myanmar people.

“It was a tragic sight for me to see the monks throw themselves to the ground as they prayed for our country. They told us we are not forsaken,” he said.