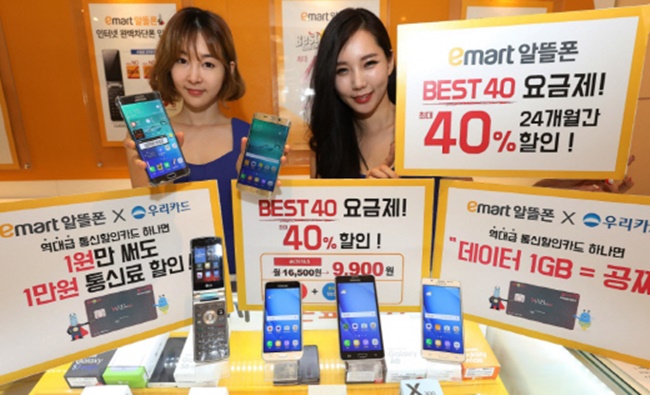 The appeal of MVNOs to customers is often explained by their more affordable mobile plans, as they can gain access to wireless network infrastructure owned by other mobile network operators at wholesale rates, rather than building their own networks. (Image: E-Mart)

According to the Ministry of Science, ICT and Future Planning (MSIF), the so-called budget telecommunications networks, widely known as mobile virtual network operators (MVNO), currently have more than 7 million users in South Korea.

However, stiff competition and market saturation are seeing MVNOs struggle to come out of the red.

The appeal of MVNOs to customers is often explained by their more affordable mobile plans, as they can gain access to wireless network infrastructure owned by other mobile network operators at wholesale rates, rather than building their own networks.

Also facing MVNOs are hostile candidate manifestos in the run up to the presidential election next month, many of which include plans to scrap minimum charges for South Korean mobile users.

With the presidential candidates pledging to lower mobile phone bills, budget mobile networks – whose cheaper phone plans have been the main appeal – are expected to take a hit after the election.

Since their advent in the summer of 2011 in South Korea, MVNOs have been enjoying a gradual increase in subscriber numbers from one million in 2012 to six million in 2016, mostly appealing to price-sensitive consumers.

Typical payment plans offered by local MVNOs are about 30 percent cheaper than those of major telecom providers including SK Telecom and KT, which have been blamed for taking advantage of their expansive monopoly power in the local wireless market. In addition, MVNOs employ aggressive tactics, such as offering to return part of monthly phone bills depending on the amount of data remaining unused in the previous month.

Though the annual losses for MVNOs have been steadily dropping, last year’s deficit still amounted to 4 percent as the market suffered an economic loss of 317 billion won.

Of all mobile phone owners, those who use services provided by MVNOs now account for over 11 percent, a notable increase from 1.1 percent in December 2011.