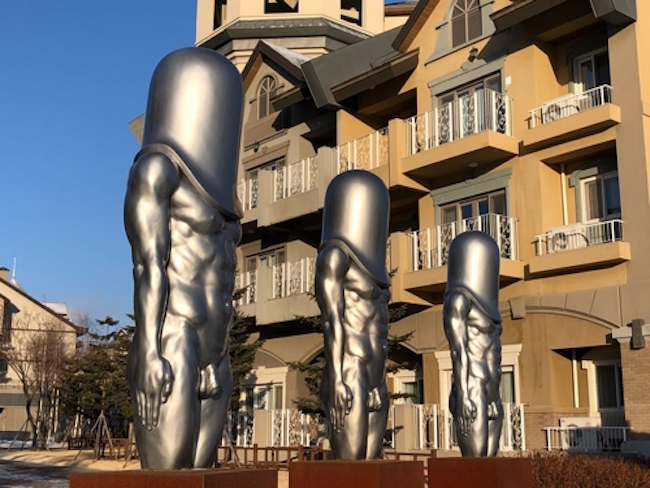 On a hill leading to the Main Press Centre of the ongoing Winter Olympics in PyeongChang are three statues of naked buff men with penis-like heads. (Image: Yonhap)

PYEONGCHANG, South Korea, Feb. 13 (Korea Bizwire) — On a hill leading to the Main Press Centre of the ongoing Winter Olympics in PyeongChang are three statues of naked muscular men with penis-like heads.

The phallic statues, officially named “Bullet Men,” by Korean artist Kim Ji-hyun have recently become the talk of the town among Korean and Japanese netizens since a Japanese sports newspaper covered them.

Instead of their formal name, the statues are now endearingly called “Morregessoyo,” a Korean word meaning “I have no idea,” in Japan after a group of Korean volunteers reportedly answered that way when a Japanese reporter asked about the statues. The report later prompted a variety of parody images with the hash tag “Morregessoyo” on Korean and Japanese social networking services, making them surprise stars of the Winter Games.

The statues have been outside the Alpensia Resort in PyeongChang, 180 kilometers east of Seoul, since the PyeongChang Biennale in 2013. They symbolize “the illusion of desire,” according to the 50-year-old artist.

Another unexpected star of the Olympics is the human-faced bird unveiled during the opening ceremony on Friday.

The striking, unforgettable look of “Inmyeonjo,” the massive puppet of a mythical bird with the face of a man, has spawned much obsessive reaction over social media.

Officials expect the viral popularity of “Bullet Men” and the human-faced bird to help revive public interest in various cultural events aimed to increase the festivity of the international athletic meet.

The government has prepared plenty of cultural side events for the Winter Olympics in the fields of music, exhibition, literature, performance as well as formative and media arts.

The so-called Cultural Olympiad takes place every day in the host city of PyeongChang and the sub-host cities of Gangneung and Jeongseon in Gangwon Province during the Olympics.

Visitors can enjoy various cultural performances, K-pop concerts, drone shows and fireworks along with medal ceremonies at the PyeongChang Medal Plaza in PyeongChang every night for an admission fee of only 2,000 won (US$1.80). 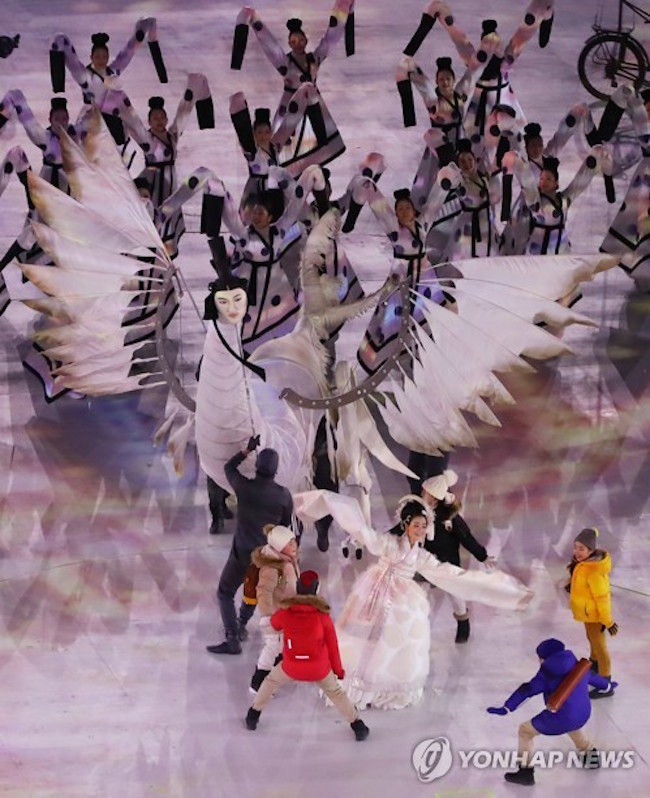 The striking, unforgettable look of “Inmyeonjo,” the massive puppet of a mythical bird with the face of a man, has spawned much obsessive reaction over social media. (Image: Yonhap)