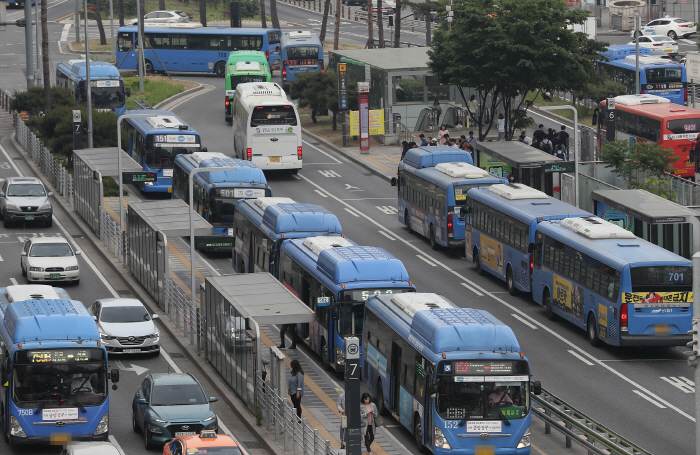 City buses run normally on roads in front of Seoul Station on May 15, 2019, after unionized bus drivers called off their planned strike. (Yonhap)

SEOUL, May 15 (Korea Bizwire) — Unionized bus drivers in Seoul, Busan and all other metropolitan cities and provinces canceled a planned strike on Wednesday after reaching last-minute wage deals with their management.

Labor and management at about 200 bus companies nationwide held marathon negotiations until early Wednesday morning over wage hikes for drivers who will suffer a reduction in income after the implementation of the mandatory 52-hour workweek in the bus industry in July.

In Seoul, unionized bus drivers reached a deal with their management with less than two hours left until their planned walkout.

In the southern port city of Busan, a deal was struck after the walkout was due to begin, with a 3.9 percent increase in wages.

Ulsan, a southeastern city, was the last place to produce a labor-management agreement to avoid a planned strike. After 18 hours of negotiations, Ulsan’s bus drivers agreed to a 7-percent wage increase, a two-year extension of retirement age and the creation of a 500-million won (US$421,000) welfare fund.

Unionized drivers in Daegu, Incheon, Gwangju and several other provinces earlier called off their planned walkout after reaching agreements with their employers on pay increases and other working conditions.

Trade unions representing more than 41,000 bus drivers operating about half of the 40,000 buses across the country voted overwhelmingly in favor of a strike last week, arguing the planned reduction of their workweek from the current 68 hours to 52 will slash their overtime pay by over 1 million won every month.

As required by labor law, the unionized bus drivers have since held further negotiations with their employers under the arbitration of the labor relations commissions.

The Moon Jae-in government intervened and offered a package of indirect financial incentives. Bus drivers asked for financial support directly from taxpayer money to make up for their income losses, whereas the government preferred indirect support and bus fare increases.

The ruling Democratic Party had also vowed to expand the semi-public bus management system, in which bus companies are in charge of bus operations and municipal governments cover their losses.

In the face of an impending nationwide public transport chaos, the government and the ruling party had said they will mobilize all possible means, including increased operation of subways and taxis, hiring of chartered buses and adjustment of school and corporate business hours, to help minimize public inconvenience.