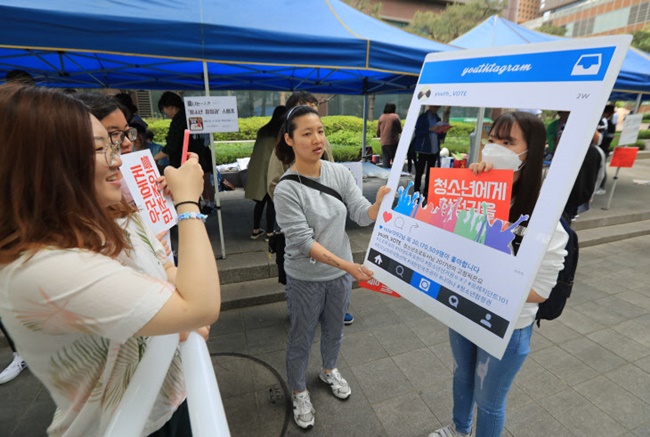 The newly-launched Busan unit of the youth rights group committed to reforming youth laws announced on Friday that its official opening ceremony is scheduled to take place in front of Busan City Hall on Sunday. (Image: Yonhap)

BUSAN, Oct. 20 (Korea Bizwire) — The southern port city of Busan is home to a new group dedicated to minimum voting age reforms, which is expected to push for the voting rights of 18-year-olds in South Korea.

The newly-launched Busan unit of the youth rights group committed to reforming youth laws announced on Friday that its official opening ceremony is scheduled to take place in front of Busan City Hall on Sunday.

Consisting of dozens of Busan-based civil societies and youth rights advocacy groups, the group is dedicated to achieving its first goal of securing voting rights for 18-year-olds for the upcoming local election next year by gathering public support and calling for electoral reforms.

“Through the Candlelight Revolution, which was spearheaded by students and youths alongside other citizens, we were able to elect a new government. The youth that played a significant role during the the Park Geun-hye Resignation Nationwide Movement should be given the right to vote,” an official said.

The group also pledged to fight for students and youth rights reforms by passing the so-called ‘Candlelight Youth Rights Act’.

“Though it has been over a decade since the Student Rights Act was proposed at the National Assembly, lawmakers are slow to pass it, and while local communities are individually showing efforts to set forth their own student human rights ordinances, they are being thwarted by a number of legal barriers.

“To create an environment where student rights are a fundamental base of education, legislation must be enacted,” the group said.

The launch of the new group comes on the heels of growing calls across the country for voting age reforms to allow 18-year-olds to cast their votes.

Earlier this year, student interest groups including the Busan YMCA announced plans to hold a mock election on the same day as the presidential election day in the hopes of raising awareness of the issue of minimum voting age.

Under current South Korean laws, only those over 19 years of age are eligible to vote, although calls for a lower voting age have garnered growing support recent years.