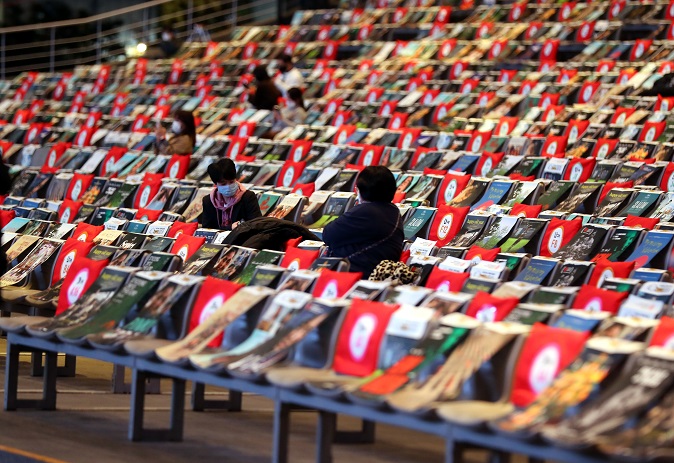 SEOUL, Oct. 30 (Korea Bizwire) — The 25th Busan International Film Festival (BIFF) came to a close Friday, with its experimental hybrid format off to a good start amid the novel coronavirus pandemic.

This year’s BIFF, which opened Oct. 21 for a 10-day run, screened 192 films from 68 countries at the Busan Cinema Center (BCC) in the southern port city of Busan, along with the opening film “Septet: The Story of Hong Kong.”

“It is meaningful that we could host the film festival in the midst of the pandemic, and I think we’re fortunate to be able to wrap up the event safely,” BIFF Chairman Lee Yong-kwan said in an online press conference.

“I would like to thank everyone and South Korean film fans for their contributions to the successful management of the event.”

The annual festival was pushed back for two weeks and scaled back sharply in terms of the number of films to be screened and its affiliated events due to the protracted COVID-19 epidemic and strengthened social distancing guidelines.

The opening ceremony was canceled, as well as the closing ceremony, with other on-stage greetings like the “Open Talk” fan meetings and other guest meeting events put off or shifted online.

Strict sanitary guidelines were implemented at theaters, requiring all moviegoers to go through personal information and temperature checks. All tickets must be booked in advance and online, with only 25 percent of their normal seating capacity allowed.

“We’ve strictly complied with the distancing rules. Some complained of them, but we thought the measures were necessary to host the event,” said chief program director Nam Dong-chul. “We’re proud that this year’s BIFF has finished in a safe way.”

Despite the tightened social distancing rules and reduced screenings, South Korean film fans have remained supportive of the country’s biggest film festival, according to BIFF.

More than 18,000 people, only about one-tenth of the figure for last year, have visited the film festival this year.

But the number accounted for 92 percent of the 20,000 tickets available for this year, marking the highest percentage in BIFF’s 25-year history.

It said out of the 10 movies screened at the 600-seat BCC outdoor theater, nine titles, including the family drama “Minari” and Disney’s animated film “Soul,” were sold out. 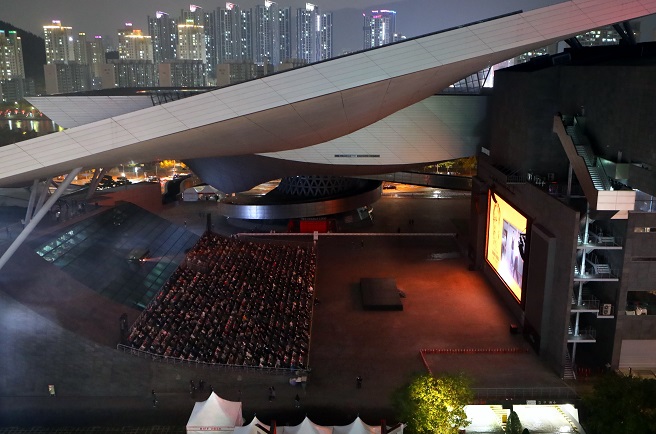 In this file photo taken Oct. 21, 2020, “Septet: The Story of Hong Kong,” the opening film of the 25th Busan International Film Festival, is screened at the Busan Cinema Center in Busan. (Yonhap)

Also, it has successfully operated online events, including 90 online guest meetings and talks, to connect overseas film directors and audiences in Busan during the film festival.

“We were forced to make a transition and try online events due to COVID-19,” Lee said. “Based on this year’s experience, I think we can come up with a far better festival next year.”

The top awards in the main competition category, the New Currents Award, went to “A Balance” by Japanese director Yujiro Harumoto and “Three” by Korean-Kazak director Pak Ruslan.

The BIFF Mecenat Award was given to Mina Keshavarz’s “The Art of Living in Danger” and Lee Soo-jung’s “Sister J,” while Jayil Pak’s “Georgia” and Lkhagvadulam Purev-Ochir’s “Mountain Cat” took the Sonje Award.

Koreans Jisoo and Lim Seong-mi brought home the best actor and best actress awards for their roles in “Our Joyful Summer Days” and “Fighter,” respectively.

Next year’s BIFF will take place from Oct. 6-15 in Busan.