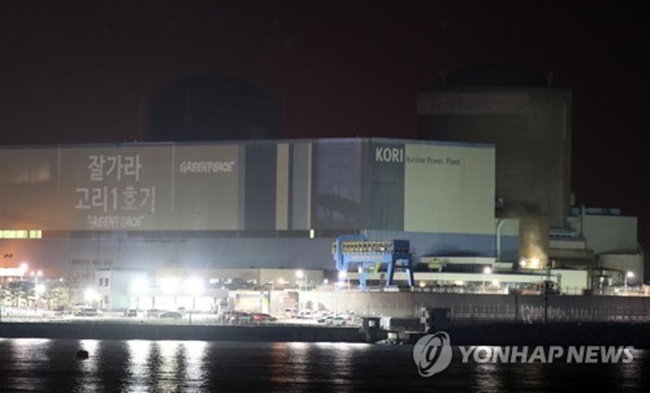 The environment advocacy group Greenpeace beams a message reading “Goodbye Kori-1″ on the wall of the nuclear reactor in Busan, some 450 kilometers southeast of Seoul on June 19, 2017. The Kori-1, South Korea’s first and oldest commercial reactor that went into operation in 1978, was shut down as of midnight on that day. (Image: Yonhap)

BUSAN, June 19 (Korea Bizwire) – The city of Busan on South Korea’s southeastern coast said Monday it will strengthen cooperation with the Argonne National Laboratory, a research institute funded by the U.S. Department of Energy, on decommissioning nuclear reactors following the shutdown of a commercial nuclear reactor in the city.

Busan Mayor Suh Byung-soo has visited the U.S. laboratory outside Chicago as part of efforts to form a memorandum of understanding between Busan and Argonne to seek cooperation in nuclear reactor decommissioning and renewable energy.

Argonne, first formed in 1942 as part of the Manhattan Project that produced America’s first nuclear bomb, is known to hold the world’s leading technologies related to atomic power.

The South Korean city’s move to work closely with Argonne comes as South Korea’s oldest commercial nuclear reactor, the Kori-1 reactor, was shut down permanently Monday as part of a broader policy move to end the country’s reliance on atomic power.

With a tie-up with Argonne, the Busan municipality hopes it will share technologies to decommission nuclear reactors and give a boost to the nurturing of related industries.

According to officials at the municipality, a delegation from Argonne plans to visit Busan in late July to sign the envisioned deal with the city, Pusan National University and Korea Hydro and Nuclear Power Corp., the operator of nuclear power supply facilities, after obtaining approval from the U.S. Energy Department.

An official at the city government expected that the deal, if made, will be instrumental in making Busan an industrial hub in the sector of nuclear reactor decommissioning.