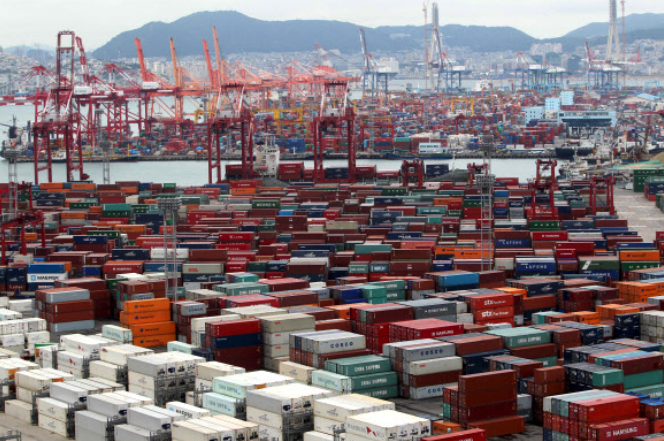 The Port of Busan was the world’s third largest container port in 2002 but was pushed down to fifth by the Shanghai and Shenzhen ports in 2004. It was again outstripped by the Port of Ningbo-Zhoushan in 2014, coming in sixth. (image: Yonhap)

BUSAN, May 24 (Korea Bizwire) – The Port of Busan, South Korea’s largest port, was marginally outstripped last year by the Port of Hong Kong, conceding the title of the fifth-busiest container port in the world, namely on account of the Hanjin Shipping crisis.

Busan is once again pushing for a comeback. On Tuesday, the local government said that the port processed 13.05 million TEUs between September 2016, when Hanjin was put under receivership, and April 2017, inching up by 1.6 percent compared to the same period from 2014 to 2015.

The two Asian ports are competing again this year. According to data from Busan and Hong Kong port authorities, both ports had processed 6.66 million TEUs as of April.

The rate of increase compared to last year, however, was higher for Hong Kong at 12.8 percent, with Busan at 4.1 percent, although the phenomenon was largely attributed to Hong Kong processing a significantly lower number of TEUs last year from February to April.

The Busan Port Authority is hoping that its port will retrieve the fifth-busiest-port title this year given the latest numbers. In March, Busan’s cargo volume appeared to be back on solid footing after Hanjin’s demise, and recorded a 11.5-percent rate of increase for the first time in 26 months by April.

The fact that Hyundai Merchant Marine is quickly increasing its transport volume, while SM Line, the new South Korean shipping firm, impressively builds up its fleet, is also a promising sign for officials. Authorities added that transshipment cargo from Southeast Asia is on a sharp rise this year, with South Korean exports also expanding since November 2016.

“If we can keep the momentum going, we’re quite hopeful that the port will make the top-five again,” said Park Ho-chul, a senior director at the BPA. “As long as we don’t run into any setbacks, we should be able to widen the gap with Hong Kong in the latter half of the year.”

The Port of Busan was the world’s third largest container port in 2002 but was pushed down to fifth by the Shanghai and Shenzhen ports in 2004. It was again outstripped by the Port of Ningbo-Zhoushan in 2014, coming in sixth.