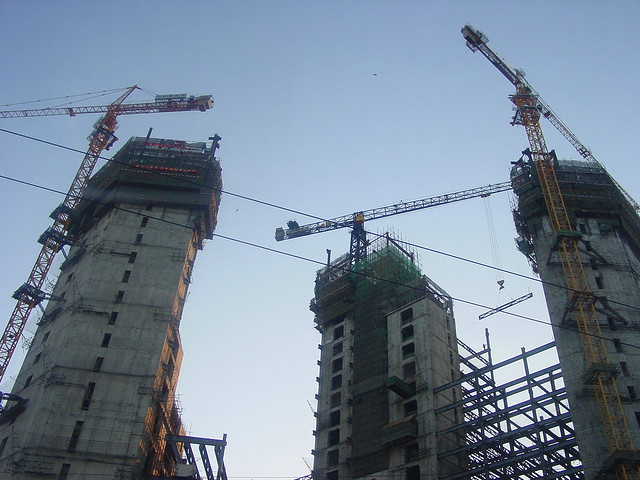 There are quite many contractors under workout or court receivership that are unlikely to recover. (image: kalmyket/flickr)

As it happens, industry officials begin talk about a crisis of the whole construction industry. That’s because there are quite many contractors under workout or court receivership that are unlikely to recover. In addition, some large contractors are suffering from lack of orders and lowered credit ratings, as well as a series of collusion judgments by the competition authorities.

The bankruptcy court judges of the Seoul Central District Court handed over a sentence on April 16 that Byucksan E&C go bankrupt without further protection. The judges commented, “Even after the company was given a reprieve, it has kept incurring losses. It was unable to pay pack debts and fell into a state of not being able to implement the self-rescue plan.”

Established in 1958 as Korea Slate Industries, the company was ranked 35th in terms of order booking volume last year. Under the brand name of “Blooming” for its apartments, it aggressively expanded into the residential building market in the early 2000s. Even though it was once ranked high within the top-ten list in terms of capacity, the company ended up filing for court receivership in June 2012 due to a liquidity crunch.

Other construction companies currently under bankruptcy protection are fretting over the prospect of following the footsteps of Byucksan. According to the Construction Association of Korea, there are eight companies out of top-100 in terms of capacity that are under a workout process, including Chinhung International, Shindongah E&C, Samho International, Dongil Construction, Dongmoon Construction, Kumho Industrial, Keangnam Enterprises, and Korea Development Corp.

Of these, most companies, except Kumho Industrial, Korea Development Corp., and Samho International that are receiving financial support from their parent companies, are under serious situations.

According to the construction association, the aggregate sales revenue in the third quarter last year of the 14 contractors under court receivership was 5,734.2 billion won, down 5.8 percent from the same period a year ago.

A construction company executive said, “Even if we want to get out of the protection by winning more orders, it’s not easy to do so because of the stigma.” To add insult to injury, the Fair Trade Commission recently slapped a penalty of 12.2 billion won with correction orders to six contractors accused of collusion over the bidding for the Busan Subway No. 1 extension line project.

Earlier, the commission put out similar orders on biddings for Incheon Subway No. 2 and Daegu Subway No. 3 projects. In addition, the commission imposed penalties of 99.1 billion won to 13 companies that won a project to build the Seoul-Incheon Ara waterway.