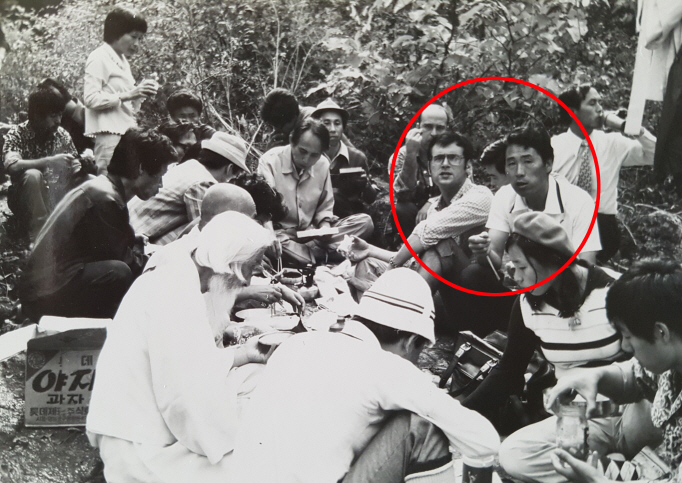 German journalist Jurgen Hinzpeter (L) and his taxi driver, Kim Sa-bok, both in red circle, are pictured in a photo taken in 1975. The photo was released by Kim’s second son, Kim Seung-pil.

GWANGJU, Dec. 24 (Korea Bizwire) — A late taxi driver, well known for taking German journalist Jurgen Hinzpeter to the center of a pro-democracy uprising in the southwestern city of Gwangju decades ago, will be buried next to the reporter’s monument at a cemetery in the city, the municipal government said Monday.

The driver, Kim Sa-bok, happened to seize an opportunity to drive Hinzpeter from Seoul to the city in 1980, where people were carrying out a democratization movement against the military junta of Chun Doo-hwan.

In the May 18 Gwangju Uprising, hundreds of citizens in the region were killed during protests. Helped by the taxi driver, Hinzpeter became the first western reporter to send out footage of the bloodshed during the crackdown on the movement to the world.

The story of the German reporter and the driver was depicted in a 2017 box-office hit, “A Taxi Driver.”

A delegation, consisting of representatives from the city and nine civic bodies, approved a bill at a meeting on Wednesday to have Kim’s remains interred at a garden established to pay tribute to Hinzpeter.

The current grave of Kim, who died many years ago and never met Hinzpeter after the democratization movement, is at a Catholic graveyard in Namyangju near Seoul.

Hinzpeter, who started his journalism career as a video reporter for the German public broadcaster ARD-NDR’s Hamburg bureau in 1963, came to Japan in 1973 as a correspondent before covering the movement in Gwangju. He reported the truth and tragedy behind the movement in 1980.

Hinzpeter died in January 2016 at the age of 79 and his nail clippings and hair, which he left in 2005 when he visited Gwangju, are enshrined in the monument there, as he wished to be interred in South Korea.