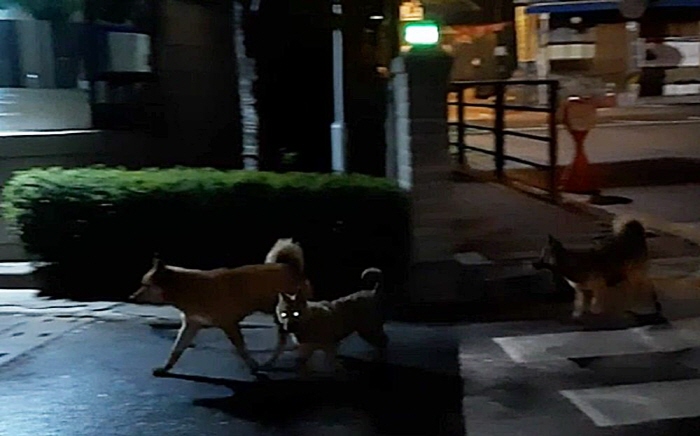 Wild dogs roaming around a residential area in Uijeongbu, north of Seoul. (Yonhap)

SEOUL, May 22 (Korea Bizwire) – A growing number of dogs who were abandoned by their owners or left their homes have become wild animals across the country, attacking cattle and other livestock, local residents and officials said Wednesday.

On April 15, about 20 golden pheasants and ornamental peacocks were bitten to death by animals with sharp teeth at a restaurant in Uijeongbu, just north of Seoul.

The restaurant owner and officials found later that the bizarre attack was committed by four wild dogs, which have been frequently spotted indiscriminately attacking cats and other domestic animals in the region since last February.

It was believed that the wild dogs hide in the nearby mountain during the day and roam around in the residential area in the early hours of the morning.

In Uijeongbu alone, four cases of livestock attacks by wild dogs were reported to the authorities in April and May.

“Parents with young children are very concerned about the frequent appearance of stray dogs in the apartment complex,” the official said.

On Jan. 3, a large wild dog invaded a livestock farm in Okcheon of North Chungcheong Province, about 160 kilometers south of Seoul, and killed about 40 chickens and rabbits.

In June last year, six wild dogs killed a cow at a farm in Gimpo, west of Seoul.

According to the Chungbuk (North Chungcheong Province) Fire Service Headquarters, the province’s firefighters received 3,081 requests for the capture of wild animals last year, and wild dogs accounted for 71.2 percent of the total.

“Firefighters are trying their best to capture wild dogs, as they can attack humans anytime,” an official at the Chungbuk headquarters said.

Animal experts are calling for devising systematic capture and management programs for wild dogs, saying their aggressiveness can be weakened through training.