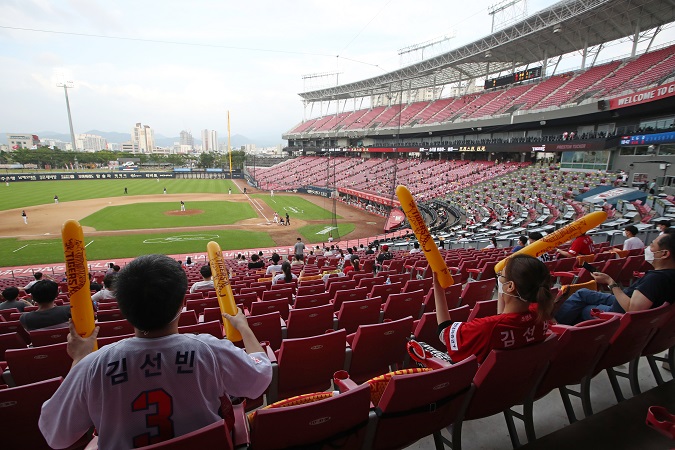 SEOUL, Aug. 11 (Korea Bizwire) — Beginning with games Tuesday evening, the cap on the size of crowds at South Korean baseball games during the coronavirus-hit season will be raised to 25 percent of capacity.

The government last week gave the green light for the Korea Baseball Organization (KBO) to start operating stadiums at 30 percent capacity, up from 10 percent.

But to continue to ensure health and safety of its fans, the KBO decided to keep the number at 25 percent for the time being.

The 2020 regular season began during the COVID-19 pandemic on May 5 without fans in the stands, as the KBO hoped to prevent infections at stadiums. Gates finally opened on July 28, with teams only making 10 percent of their seats available.

The KBO also produced a new health and safety manual for fans with several restrictions in place. Fans must go through temperature checks at entry and must keep their masks on once inside the stadium. They all must sit apart from one another.

Fans are also prohibited from eating and drinking alcoholic beverages from their seats. Loud chanting, singing and other cheering activities are also banned.

No positive COVID-19 case has been reported from baseball games.

KBO clubs had been in dire financial situations with zero gate receipts, and they had hoped the stadiums would open back up by late June or early July. Welcoming back fans, albeit on a limited basis, has provided much-needed relief.

Five games are scheduled for Tuesday: the Kia Tigers versus the LG Twins at Jamsil Baseball Stadium in Seoul; the Hanwha Eagles against the Kiwoom Heroes at Gocheok Sky Dome in Seoul; the NC Dinos versus the Lotte Giants at Sajik Stadium in Busan, 450 kilometers southeast of the capital; the Doosan Bears visiting the Samsung Lions at Daegu Samsung Lions Park in Daegu, 300 kilometers southeast of Seoul; and the SK Wyverns against KT Wiz at KT Wiz Park in Suwon, 45 kilometers south of the capital.