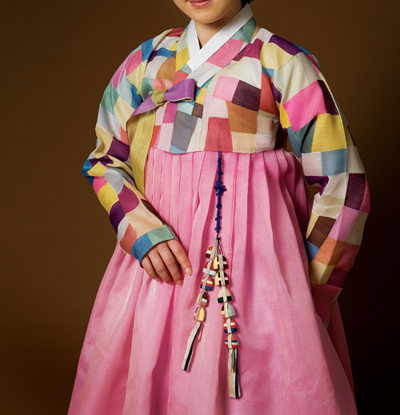 (image:KOREA.NET – Official page of the Republic of Korea at flickr)

SEOUL, Korea, Nov 05 (Korea Bizwire) – On November 1, a “hanbok” fashion show was held at the wharf of Dokdo on the East Sea. The event, called “I Love You, Dokdo,” was hosted by the North Gyeongsang provincial government and sponsored by fashion designer house Maison-de. Lee Young Hee, a renowned hanbok designer who was instrumental in establishing a museum featuring Korean culture in New York’s Manhattan and participated in the Pret a Porter Paris (Women’s Ready-to-wear and Accessories Collections) exhibition for the first time among Korean designers, was the principal organizer of the event.

Of late, the market for traditional dresses is reviving after a slump for a few years. A variety of events are being held to promote hanbok while fashion designers are increasingly combining their western designs with traditional design components. Last month, President Park Geun-hye appeared unannounced in a hanbok fashion show with beautiful hanbok on in her state visit to Vietnam. 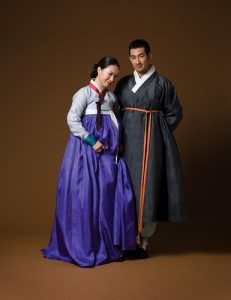 (image:KOREA.NET – Official page of the Republic of Korea at flickr)

Still the hanbok market remains miniscule comparing to the total fashion clothing market. The market for hanbok last year was 1.3 trillion won, of which the retail portion excluding fabric and intermediate materials was 600 to 700 billion won. This is only about 2 percent of the whole 2012 fashion market of 34.3 trillion won as estimated by the Samsung Fashion Research Institute. The frequency with which the general public wears hanbok at least once or twice a year is scanty 68.8 percent, even though much more are interested in wearing one in ordinary occasions as well as special ones such as weddings and traditional holidays.

What’s keeping them from wearing it in everyday occasions? Maybe that’s because hanbok is perceived as something inconvenient to wear. In order to change that perception, efforts at the level of government and private sector have been made of late. To celebrate the 17th Day of Hanbok on September 17, a fashion show “Culture Station 284″ was held at the old concourse of Seoul Train Station in downtown Seoul. Hosted by the Ministry of Culture, Sports, and Tourism and directed by fashion stylist Seo Young Hee, the hanbok fashion show featured dresses modified for the 21st century, with shorter sleeves and easy-to-wear skirts. The ministry also decided to hold similar shows twice a year in the spring and fall seasons with annual budget for the events increased to 1 billion won from about 300 to 400 million won.

Those who wish to purchase a set of hanbok after watching the fashion show can do so at traditional markets at much more inexpensive prices. Although hanbok sold by designer houses may fetch several million won, one can buy a full set in markets such as Gwangjang Market in downtown at around 400,000 or 500,000 won. Gwangjang Market, located right in the middle of downtown adjacent to the Jongmyo Shrine, is now more famous for street food vendors for young lovers. But it has been more than a hundred years since the market became the magnet for buyers of wedding hanboks. The market is still home to the biggest hanbok fabric merchants in Korea. 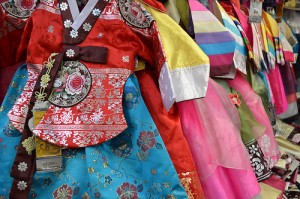 Typical hanbok stores within the market have fabric stores on the lobby and second floors with the third and fourth floors used for sewing shops manned by veteran garment cutters with experience of more than 30 years. The market is always crowded with couples preparing for weddings and their mothers, as well as foreign tourists who want to peek into the life of ordinary Koreans and buy one for themselves. The stores are so popular because they offer hanbok at about 20-40 percent cheaper than hanbok boutiques while dispensing with valuable tips on how to wear and how to maintain it.

Although efforts to raise awareness of hanbok were recent, there are many more who have been in love with hanbok for such a long time. A group called “Hanbok Nori,” organized in 2011 with about 1,100 members, has been active in promoting hanbok through a variety of performances including flash mob events. Beginning with a hanbok flash mob held in August 2011 near Hongik University that gained rave reviews, Hanbok Nori has been doing it in many other occasions such as the March 1 Independence Movement Day and the August 15 Liberation Day. Especially the one held in front of Yongsan Train Station on last year’s Liberation Day successfully appealed to the general public. 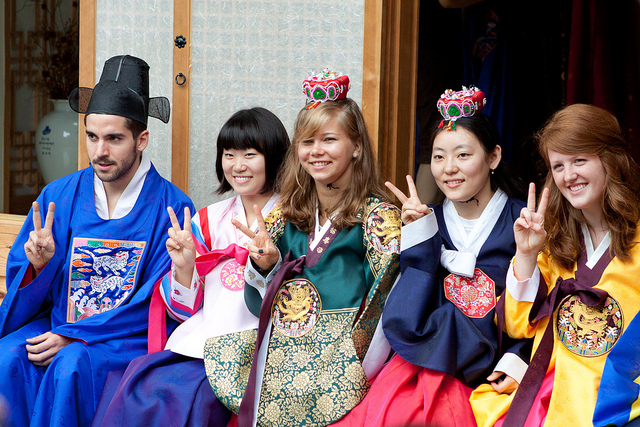 Nothing symbolizes a nation’s identity better than traditional costumes. (image:Jirka Matousek at flickr)

The most common sight when you go to a place overseas is foreign tourists taking pictures of locals wearing traditional dresses. That means nothing symbolizes a nation’s identity better than traditional costumes. It has been too long since we Koreans lost interest in our own dress. Maybe it’s time we rediscover our priceless heritage just like we found our pride in kimchi that was considered only a decade ago stinky and something to be embarrassed.