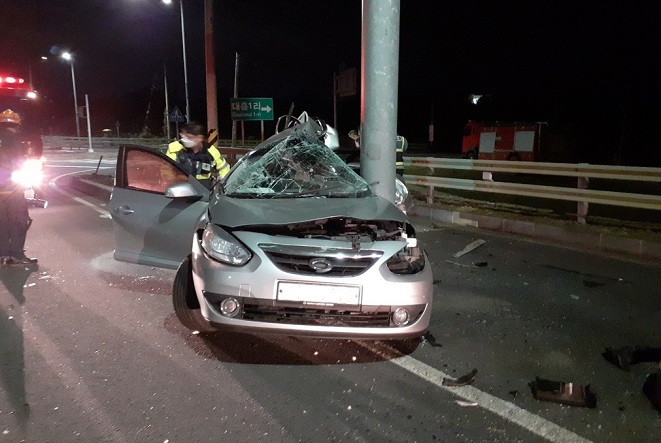 This file photo, provided by the fire authority of the southern Jeju Island, shows a car that crahsed into a traffic pole on Nov. 6, 2020. The car was known to have been driven by an unlicensed 18-year-old.

According to a Korea Road Traffic Authority report submitted to Rep. Kang Deuk-gu of the ruling Democratic Party, teenagers caused 833 accidents last year while driving without a license, a sharp jump from 618 and 689 accidents in 2018 and 2019, respectively.

More than 3,100 people suffered injuries and 63 died in the total of 2,140 accidents involving unlicensed teenagers during the three-year period, according to the data.

About 27.7 percent of the accidents were caused by 17-year-olds while accidents involving 16-year-olds accounted for 22.5 percent and 18-year-olds at 21.5 percent. The legal driving age is 18 in South Korea.

Kang said the government should come up with measures to prevent dangerous driving by unlicensed teenagers, pointing out that a lot of them rent cars with a fake identity.

“Teenagers must acknowledge that their simple curiosity and desire for driving can become a serious crime that takes away other people’s lives,” he said, adding that schools should also strengthen traffic and safety education.