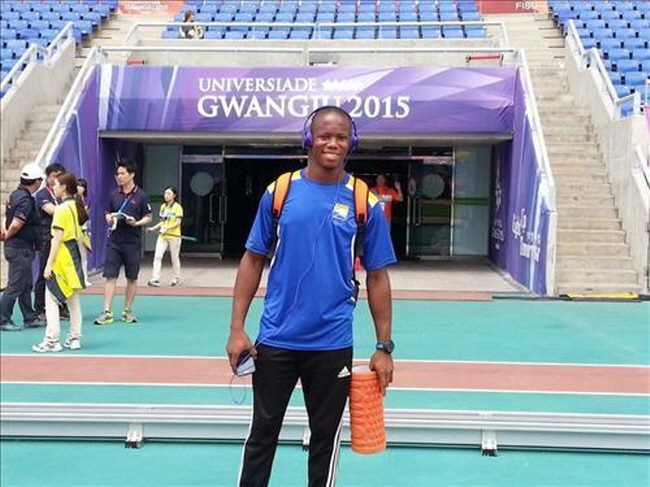 Fallon Forde, a sprinter from Barbados, poses at the Gwangju Universiade Main Stadium before the athletics competitions on July 9, 2015. (Photo courtesy of Fallon Forde)

GWANGJU, Jul. 10 (Korea Bizwire) — A Caribbean sprinter who became the talk of the town at this Universiade for running in worn shoes has been named one of the recipients of a South Korean company scholarship, an official said Friday.

Fallon Forde from Barbados has won the SK Happiness Scholarship, a special program run by SK C&C, a South Korean IT services provider, an SK C&C official said on condition of anonymity.

It is designed to award student-athletes who have overcome hardship and demonstrated true sportsmanship at the competition.

The other winners will be announced at a formal event on Monday at Kim Dae-jung Convention Center in Gwangju, the host city of the competition some 330 kilometers south of Seoul. The total prize is 50 million won (US$44,000).

Forde competed in shoes donated by a friend in the 100-meter and 200-meter sprinting events at this Universiade.

The 25-year-old failed to reach the finals for both but recorded his season best of 21.46 seconds in the 200m on Thursday.

He started sprinting at the late age of 19, but demonstrated potential by leading his Barbados team to fourth place in the men’s 4x200m relay at IAAF World Relays 2014.

He almost missed competing in this Universiade after his left shoe ripped down the middle during training just five days before his first race.

The official Adidas store here had told him it would take seven days to repair, but a local seamstress his attache discovered was able to close the hole in a matter of hours.

Forde’s story has made the headlines of a couple of South Korean newspapers since the Universiade kicked off last Friday.

His next plan is to prepare for the Barbados national team trials to compete at the Olympics scheduled for next year in Rio de Janeiro, Brazil.